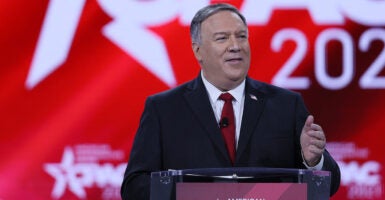 Former U.S. Secretary of State Mike Pompeo, seen here addressing the Conservative Political Action Conference on Feb. 27, said of moving the U.S. Embassy to Jerusalem, "There was no war. There was no intifada. Instead, there was global recognition that, 'What took you so long?'" (Photo: Joe Raedle/Getty Images)

Former Secretary of State Mike Pompeo played a role in some of the biggest foreign policy accomplishments of the Trump administration.

He joins “The Daily Signal Podcast” to discuss the impact of the Abraham Accords—pacts involving the normalization of relations between Israel and the United Arab Emirates, Bahrain, and Sudan—and the moving of the U.S. Embassy in Israel to Jerusalem.

He also weighs in on the increasing threat of the Chinese Communist Party in the Biden administration, as well as the phenomenon of all of the isms that are part of American society today, such as multiculturalism.

“And so, whether it’s these ideas that the progressive movement now has, that they refer to as being ‘woke,’ they undermine the central understanding that our Founders had about who we are and also my Christian understanding of how it is that the Bible asks us to treat each of our neighbors.”

Mike Pompeo: It’s great to be with you.

Del Guidice: Well, thanks for making time to be with [us]. You were part of some of the biggest foreign policy accomplishments in the Trump administration, can you highlight a couple that you think are some of the biggest that you’re most happy about?

Pompeo: We began by making sure that everyone in the world understood that we were going to work to protect American sovereignty, we were going to put the American people first in everything that we did. And the results of that were enormous—enormous for America and for the world.

I’ll give you two quick examples. First, the Abraham Accords—multiple countries inside the Middle East acknowledging that Israel is the rightful homeland of the Jewish people and they were no longer going to treat them as the pariah that had happened for decades and decades.

Both Republicans and Democrats had come at this saying, “You can’t solve that problem ’till you solve the Israel-Palestinian clash.” And we said, “Nonsense, we can do it.” And we did. And the Middle East will be more stable and Arab nations across the region and Israel will be more prosperous as a result.

Second, and perhaps the one that is most important, is that we flip the switch on the Chinese Communist Party.

I hope this next administration will take that on in the same way that we did, the technology front, too. If they do, America will be a democracy, will be a constitutional republic, and Americans will be more prosperous.

Del Guidice: Well, something that a lot of people watched and past presidents had talked about was moving the embassy back to Jerusalem.

A lot of presidents talked about it, never actually happened, and that did happen under President [Donald] Trump. And many people that I’ve talked to have pointed to, that was something that they really respected about President Trump.

So I wanted to ask you just if there’s anything about that that you want to highlight, the process or just looking back on it now, what your takeaways are from that period of time where you guys worked on that?

Pompeo: I was the CIA director at the first part of the administration. I remember working to help the president understand both what the policy was, what the law required, and what the facts were on the ground and what the likely ramifications were if he made that decision.

Multiple presidents had said, to your point, “I’ll do this if I’m elected,” and then in the end became convinced that, “Oh, my goodness, this might cause war, might cause something bad to happen.”

And President Trump and our team built out an understanding, said, “No, we think this is the right thing to do. We think we can manage this.” And we did. And there was no war. There was no intifada. Instead, there was global recognition that, “What took you so long?”

Del Guidice: Well, you’ve been talking on Twitter a little bit about all the isms, and that’s part of American society today. Multiculturalism, the isms that we’re now talking about, why is this a problem? And how can we address this language we’re talking about now? What is the better way to go about it?

Pompeo: There’s not a conservative that I know that doesn’t believe that every human being ought to be treated precisely the same way, because we are made in the image of God and that human dignity depends on the fact that we treat each other in a way that is respectful and kind and as human.

So whether it’s these ideas that the progressive movement now has with, that they refer to as being “woke,” they undermine the central understanding that our Founders had about who we are and also my Christian understanding of how it is that the Bible asks us to treat each of our neighbors.

Instead, they want to create special classes and special groups instead of treating just each of us as a human and, in our case here in the United States, as an American.

Del Guidice: … You mentioned this a little bit before about your concerns that the Chinese Communist Party poses, how do you see these concerns intensifying with the Biden administration?

You have to confront it. You have to make clear that these are the expectations. These are the standards that we’re going to hold you to. And if you steal American intellectual property, we’re going to impose economic pain on your country. If you come into the United States and try and spy on us, we’re going to close your consulate in Houston. That’s what we did in this administration.

Or if you send people into our schools and our research institutions to try and steal some of the most important American technology and secrets, we’re going to prosecute you criminally. That’s what we did in our administration.

If the next administration says, “Goodness, I don’t want to confront China because we’ve got a lot of businesses making money there,” it’ll only end up worse for the American people.

Del Guidice: On that note, and as we wrap up, what do you think we should expect from China in the next couple years?

Pompeo: They’re going to test us. They’re going to see if this administration is prepared to respond the same way that ours did. And if we don’t, if we end up doing things like rejoining a climate agreement that allows the Chinese to continue to pollute but requires America to cease growing its economy, the Chinese Communist Party will see that weakness and they will continue to expand.

They’ll put pressure on Taiwan. They’ll continue to undermine the commitments that they made to the people of Hong Kong. They’ll treat the Falun Gong and Christians inside of their own country worse and worse and worse, and they will undermine our central understanding about the rule of law and democracy.

Del Guidice: Well, Secretary Pompeo, it’s great having you on “The Daily Signal Podcast.” Thanks for joining us.

Pompeo: It’s wonderful to be with you. Have a good day.