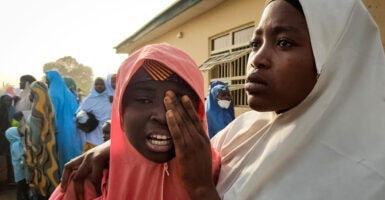 Kidnapping has become a lucrative practice in Nigeria as the country continues to undergo an economic crisis. Pictured: A kidnapped girl reacts as she reunites with a family member in Jangebe, Zamfara state, March 3, after they were kidnapped from a boarding school in northwestern Nigeria Feb. 26. (Photo: Aminu Abubakar/AFP/Getty Images)

In the latest in a series of kidnappings (and even killings) of schoolchildren reported earlier by media outlets, including The Daily Signal, a criminal gang of more than 100 armed bandits invaded a boarding school in Zamfara, northwest Nigeria, on Feb. 26 and abducted as many as 300 innocent schoolgirls.

No sooner had the government intervened to release them than other gangsters kidnapped for ransom 100 miners in the same region, according to The Guardian. And, on March 15, The Wall Street Journal reported yet another kidnapping of children and teachers from a school in the northwestern Kaduna state.

As The New York Times reports, the “frequency of mass kidnappings of girls and boys at boarding schools in northwestern Nigeria is rising in part because abduction has become a growth industry amid the country’s economic crisis.”

A former British colony, Nigeria is Africa’s most populous country, with more than 200 million people. A new constitution established civilian government in 1999. President Muhammadu Buhari won reelection in 2019 despite his long absences from the country and rumored ill health.

Although a multinational coalition has expelled the Islamist terrorist organization Boko Haram from many of its strongholds in northeast Nigeria, frequent attacks continue, including by the increasingly powerful Islamic State West Africa Province.

There also have been lethal outbreaks of violence between herders and farmers in the Middle Belt region, a centrally located area so called because it is the transition region between largely Muslim northern Nigeria and the Christian south. Most of the violence has come at the hands of the herders, who are better armed than the farmers. There have been some reprisal killings by farmers, but they have suffered most of the deaths overall.

Nigeria’s petroleum-based economy has been battered by low global oil prices in recent times. Agriculture, telecommunications, and services are contributing to modest economic growth, but more than 60% of Nigeria’s population still lives in extreme poverty.

Although Nigeria’s economic freedom score improved slightly in the 2021 edition of the Index of Economic Freedom, the Nigerian economy remains mostly unfree this year. In addition to chronic and severe political instability and a range of security threats, greater economic freedom is blocked by ongoing policy failures that undermine the rule of law.

These failures of policy have left unaddressed numerous structural weaknesses. For example, protection of property rights is weak because of poorly regulated, complex, and corrupt state-level property registration and titling systems. Land ownership disputes in rural areas are common. The constitutionally independent judiciary is vulnerable to political interference and corruption. Courts lack adequate funding, equipment, and training. Corruption in public and private institutions is pervasive, especially in customs and the oil and security sectors.

It is these structural weaknesses that are reflected by ongoing violence and lawlessness in Zamfara and throughout the country. Perhaps the greatest tragedy from this era of lawlessness—and the one that will have a potentially devastating long-term impact on the country—is the fact that a large number of schools nationwide have closed due to fears of violence. That has denied an education to millions of Nigerian children.

The sooner the government of Buhari gets serious about addressing the underlying issues, the sooner the people of Nigeria can enjoy the stability and opportunity that comes from the rule of law.