Biden Prepares to Strip College Students of Due Process Rights 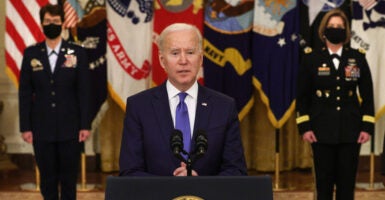 It’s worth reminding people that if President Joe Biden were compelled to live by the standards he intends to institute for college students accused of sexual misconduct, he would be presumed guilty of rape, denied any legitimate opportunity to refute Tara Reade’s charges and tossed from office in disgrace.

The New York Times reports this week that Biden’s Kafkaesque “White House Gender Policy Council” is “beginning his promised effort to dismantle Trump-era rules on sexual misconduct that afforded greater protections to students accused of assault.” The subhead informs us that, “The Biden administration will examine regulations by Betsy DeVos that gave the force of law to rules that granted more due process rights to students accused of sexual assault.”

The most disingenuous word here — though the piece is brimming with them — is “more.” History did not begin in 2015, and former education secretary Betsy DeVos did not invent more due process rights in Title IX; she simply reinstated time-honored fundamental due process rights that have guided justice systems in the liberal world for hundreds of years. The Constitution says — twice — that no citizen shall be arbitrarily “deprived of life, liberty or property without due process of law.” No means no.

It was only in 2011 that the Obama administration instituted fewer due process rights through the force of law, denying the accused the ability to question accusers, the right to review the allegations and evidence presented by their accuser, the right to present exculpatory evidence, and the right to call witnesses. Basically, the right to mount a defense.

It was the Obama administration that asked schools to institute a system that empowered a single investigator, often without any training and susceptible to the vagaries of societal and political pressures, to pass unilateral judgment on these cases. Also, under the Obama administration rules, colleges were allowed to adjudicate sexual abuse and assault cases using a “preponderance of evidence” rather than a more stringent “clear and convincing evidence” standard.

Now, Jennifer Klein, the “Gender Policy Council” co-chair and chief of staff to first lady Jill Biden, says “everybody involved” in a sexual complaint, “accused and accuser,” should be entitled to due process.

OK. Has anyone ever argued that the accuser’s right to come forward should be diminished, or that the accused should be afforded fewer protections than any other American who says they are the victim of a crime? We should never diminish the pain and anguish those who come forward with these charges go through. But the presumption of innocence is a legal term based on a values system. And if the federal government is going to dictate how colleges deal with sexual assault accusations, it has a responsibility to uphold the norms of the Constitution.

The good news is that between 2011 and 2021, there has been a string of court cases repudiating Biden’s position. Hundreds of lawsuits were filed since 2011. A 2015 study by United Educators found that a quarter of the Title IX statute had been challenged by students who either filed lawsuits in the federal courts or lodged complaints through the Department of Education’s Office for Civil Rights. Dozens of schools, including Northwestern University, Dartmouth College and Yale, settled cases, while schools such as USC, Pennsylvania State University, Ohio University, Hofstra, Boston College and Claremont McKenna all lost decisions.

Schools complained about the costs of implementing due process, yet the average cost of settling these claims was around $350,000, with some going as high as $1 million.

This, not incidentally, also means that some people who are guilty of sexual assault will claim to be victims of flawed hearings or unfair sanctions simply because they can circumvent the norms of justice. Proper due process protects both the accuser and the accused. At the very least, the state should ensure that students are afforded the same impartiality, norms and protections that every one of us expects in the real world.

Either we believe principles are the best means of fairness, or not. Biden, it seems, only believes in them for himself.