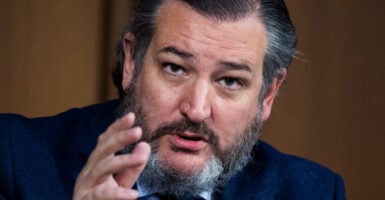 Sen. Ted Cruz: I think one of the worst legacies of the Obama presidency was the politicization of the Department of Justice during the eight years of the Obama-Biden presidency.

The Department of Justice has a long history of being apolitical, of exercising fidelity to law, of not being used as a partisan weapon to target the enemies of whichever administration is in power.

The Obama-Biden administration corrupted that process, and we are still dealing with the consequences.

I believe appointees to the Department of Justice should have a demonstrated record of fidelity to law and impartiality, and ability to defend the rule of law.

Ms. Gupta, as I look at your record, your record is one of an extreme partisan advocate. Your record is an ideologue. Now, there’s a role in our democratic and political process for ideologues, for people that are extreme, radical advocates.

That role, I believe, is not being the No. 3 lawyer at the Department of Justice in charge of the impartial and fair administration of justice.

As I look at your record on every single issue, the positions you’ve advocated for are on the extreme left, and you’ve demonstrated an intolerance for, and hostility to, anyone that disagrees with the extreme left political positions.

On the issue of abortion, is there any restriction whatsoever on an abortion that you believe is permissible?

Vanita Gupta: Senator, first let me begin by saying I’m sorry that you feel that way. As a lifelong civil rights advocate, my duty has been to enforce the Constitution, not enforce anyone’s political agenda or partisan agenda.

I have apologized today for some of the harsh rhetoric that I’ve used, and I mean that genuinely.

Cruz: And I’m not focusing on your college years. I’m focusing on [you] as an adult and practicing lawyer. But let’s just start with a substantive question. Is it permissible for the government to prohibit partial-birth abortion, yes or no?

Cruz: OK. So, you’re declining to answer that. How about the [Supreme Court’s District of Columbia v. Heller] decision, which upheld the individual right to keep and bear arms, a fundamental right in the Bill of Rights? Was Heller rightly decided?

Gupta: Senator, Heller is law of the land, and I will enforce Heller, as custom of the Supreme Court.

Cruz: You’re not answering that either.

Not too long ago, religious liberty was a bipartisan commitment in Congress. The Religious Freedom Restoration Act was introduced by then-Rep. Chuck Schumer. It passed the House unanimously. It passed the Senate 97 to 3, and was signed into law by President [Bill] Clinton.

Now, today’s Democratic Party has abandoned religious liberty. Indeed, the Equality Act, of which you are a vocal supporter, that has now come out of the House of Representatives, is a radical piece of legislation that among other things explicitly repeals significant aspects of the Religious Freedom Restoration Act to take away our religious liberties.

You have been a vocal defender of the Equality Act. Do you agree with the provision stripping RFRA’s religious liberty protections from Americans?

Gupta: Senator, let me begin by saying that religious liberty is incredibly important to me. I am a person of faith. My family is one of deep and abiding faith. And this country’s founding freedom was rooted in religious liberty.

I have defended religious freedom throughout my career. When I was at the Justice Department, I launched an interagency effort to protect religious liberty.

Cruz: Ms. Gupta, I appreciate that, but our time is limited. So, if you could answer the question.

Cruz: Mr. Chairman, I understand that she has things she wants to say, but I asked if she supports the repeal of RFRA. That’s the question she was asked.

Durbin: Allow her to answer.

Cruz: … and I understand that you support her nomination, so you’re giving a speech, too. But I’m asking a question.

Durbin: I’m asking you to allow her to answer.

Cruz: She was not answering. She’s welcome to answer the question. The question is: Do you support the Equality Act’s repealing RFRA’s protection of religious liberty for Americans?

Cruz: Let me try a third time. Do you support the Equality Act’s repeal of RFRA’s religious liberty protections?

Gupta: Senator, if confirmed as associate attorney general, my duty will be to enforce laws to protect religious liberty and the anti-discrimination laws that the Justice Department must enforce.

Cruz: OK. So, you’re declining to answer that as well. Let’s move to another topic, which is school choice.

The Black Alliance for Educational Options was fighting on the other side. The federal court at issue there specifically reprimanded the Department of Justice under your leadership for “ineffective lawyering”—that’s a quote—and for attempting to “circumvent the ordinary litigation process in order to regulate the school choice program without any legal judgment against the state.”

Do you regret using the Department of Justice to fight against the school choice program that was providing hope and opportunity to low-income minority kids in Louisiana?

Gupta: Senator, I have dedicated my life to fighting for opportunity for low-income children of all communities in having educational opportunity.

Again, as I said, my duty, if I am confirmed as associate attorney general, will be to enforce the law and Constitution, and I have to look at the facts and laws of any particular situation.

Let’s move to another one. At the beginning of this hearing, Chairman Durbin asked you about abolishing the police, and you said, “I do not support defunding the police,” which is clearly the right political answer seeking to get confirmed.

I would note that just a few months ago, last year in written correspondence with the Senate of the United States, you encouraged Congress to “[r]eexamine federal spending priorities and shrink the footprint of the police and criminal legal system in this country.”

And you also encouraged reallocating resources and stated, “Some people call it ‘defunding the police.’ Other people call it ‘divest/invest.’ But whatever you call it, if you care about mass incarceration, you have to care about skewed funding priorities.”

These were not college writings. This was about eight months ago that you wrote this to the Senate. By any measure, that’s advocating defunding the police. And yet today you’re telling this committee you don’t support that.

Gupta: Senator, respectfully, I disagree with how you’re characterizing that. I don’t support defunding the police. I’ve been very clear about that. …

Cruz: Were the quotes I read inaccurate?

Cruz: Were the quotes I read inaccurate?

Gupta: Well, if I may, can I tell you what I … Those statements reflect conversations that I’ve had with sheriffs around the country, police officers, police chiefs, civil rights activists, who have been talking to me for years, long before, as I said, the events of the summer, about the fact that we have placed so many of our nation’s social problems at the feet of police.

We have given, in many communities, only one response available for when we have family members in crisis or with drug addictions. And this is an issue where it is one that, I think, really unifies law enforcement and civil rights advocates and community leaders who are seeking alternatives to incarceration for addressing some of these very challenging questions, and sheriffs who are, frankly, fed up with the fact that their jails are 70% filled with people who are suffering from mental illness.

Cruz: With all due respect, I don’t believe you have been speaking to sheriffs who are advocating for defunding the police. And I’ve spoken to far too many sheriffs to find that credible. Thank you.