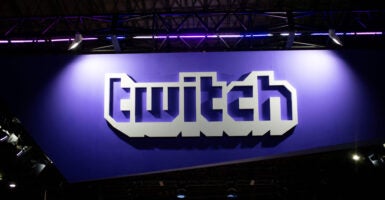 You may not know what Twitch is, but your kids sure do.

The site is one of the country’s biggest video game streaming platforms, where avid gamers can watch their favorite games played by larger-than-life personalities. According to some estimates, as many as 2.3 million people could be watching Twitch streams at any given second.

And a large chunk of those viewers are children.

While Twitch does not release user data for age brackets under 16, some of the most watched games on the site are things like “Fortnite,” “Minecraft,” and “Valorant,” games incredibly popular with elementary and middle school-aged kids.

The left has recognized the potential for Twitch to target kids, and has actively begun infiltrating the platform, infesting it with woke propaganda and PC culture.

In the most recent incident of woke virtue signaling, Twitch released a tweet, which has since been deleted, encouraging people to “celebrate Womxn’s History Month.”

The term “womxn,” in the constantly evolving language of woke leftism, was considered a more inclusive term than “woman,” as it includes men who identify as women and women who don’t identify as either sex.

The tweet was immediately met with backlash from both sides of the aisle. Many argued that Twitch was erasing women by using the PC term and pretending that men who identify as women are the same as actual women.

Alarmingly, a larger contingent argued that Twitch hadn’t gone far enough. Leftists angrily accused Twitch of transphobia for using the word “womxn” and for daring to imply a man is not the same as a woman just because he says he is.

In a move that shocked absolutely no one, Twitch caved to the woke mob and issued an apology, writing:

While we originally wanted to use a word that acknowledges the shortcoming of gender-binary language, after hearing directly from you, including members of the LGBTQIA+ community on Twitch, we will be using the spelling ‘women’ moving forward.

We want to assure you that we have, and will continue to, work with the LGBTQIA+ community. We’re still learning. Our good intentions don’t always equate to positive impact, but we’re committed to growing from these experiences, doing better, and ensuring we’re inclusive to all.

This is not the first time Twitch has promoted PC terms and gone all in on identity politics. In September 2020, Twitch highlighted “Hispanic and LatinX” streamers for National Hispanic Heritage Month, and in December 2020, the site removed the “blind playthrough” video tag—a classification meaning the game was being played for the first time with no prior knowledge—as it could be offensive to the visually impaired.

Perhaps the most disturbing indication of how deep the roots of identity politics go on Twitch is the Safety Advisory Council, an Orwellian group that exists almost completely to ban people from the platform for wrongthink.

One member of the council, a man who goes by the online handle “FerociouslySteph,” identifies not only as a woman, but as a deer.

He’s also on record encouraging the looting and rioting from last summer. And he gets to decide what your kid is seeing.

Twitch represents the pinnacle of nightmarish woke capitalism: a site designed for the sole purpose of connecting gamers with people playing the games they enjoy has been co-opted by leftists hellbent on turning it into a propaganda engine.

Worse, Twitch’s young audience provides fertile ground for indoctrination. Children won’t even notice that the site they watch “Fortnite” on is pushing leftist ideology. They’ll just passively absorb what Twitch tells them, be it “women aren’t real” or “it’s offensive to say ‘blind.’”

The cultural power that the radical left currently wields is immense. Companies like Twitch that wave the woke banner by purging anti-leftist dissent from their platforms are, in the words of Chris Rufo, a visiting scholar at The Heritage Foundation, “demolishing the old culture to claim hegemony for the new one.”

If we as Americans want to keep our traditional values, or frankly, even the option of having those values at all, we must stand up and protect them. They will not defend themselves.

The culture war is nothing new. But as the left continues its push for total control of the creative industries, it’s America’s children who will suffer the most.