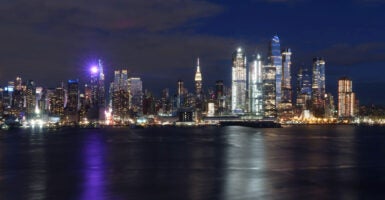 The United States received its lowest ranking ever in the newly released 2021 Index of Economic Freedom, placing just 20th in the world in overall economic freedom. Pictured: Midtown Manhattan, the Empire State Building, and the towers of Hudson Yards in New York City as seen from Weehawken, New Jersey, on March 6. (Photo: Gary Hershorn/Getty Images)

Last week, two important reports were released, shining a light on one of the major challenges facing America—excessive government spending that is causing the poor and declining fiscal health of the federal government. This reduces economic freedom and threatens prosperity, making it more difficult for families to live the American dream.

In The Heritage Foundation’s 2021 Index of Economic Freedom, which was released March 5, the results weren’t pretty for the United States. The U.S. received its lowest ranking ever, just 20th in the world in overall economic freedom.

The reason? A dramatic drop in fiscal health, scored at only 34.9 out of 100. This is worse than 150 other countries and is a failing grade on anybody’s report card.

Later that same afternoon, the Congressional Budget Office released “The 2021 Long-Term Budget Outlook.” This report provides a snapshot of the nation’s fiscal health over the next 30 years.

The diagnosis is not good.

Because of overspending, the national debt held by the public has already eclipsed the size of the economy, and is projected to continue rising much higher than it ever has before, reaching 202% of GDP by 2051.

The net interest costs for the taxpayers of financing this debt will skyrocket from 1.4% of GDP (about $300 billion) this year to 8.6% of GDP in 2051. For the sake of comparison, that would be more than 250% higher than what we currently spend on national defense as a percentage of GDP.

The primary drivers of the increases in spending are unsustainable entitlement programs, which require significant reform not only for the sake of the taxpayers, but also to allow better results for Americans in need.

Unless substantial reforms are implemented, Medicare’s Hospital Insurance Trust Fund will be exhausted in 2026. The Social Security Trust Fund is projected to be depleted by 2032, which could cause across-the-board benefit reductions for all retirees just 11 years from now.

The Congressional Budget Office has been warning for years about the significant negative consequences of the high and rising federal debt. As the recent “Long-Term Budget Outlook” report indicates, the current fiscal trajectory would “reduce business investment, and slow the growth of economic output,” and would “increase the risk of a fiscal crisis.”

The Congressional Budget Office also warns that high levels of debt would pose a threat to America’s national interests because it would cause “increase[d] interest payments to foreign holders of U.S. debt,” and “an erosion of confidence in the U.S. dollar as an international reserve currency.”

This current path is not acceptable.

The United States needs to get its fiscal health in order, not just to improve its ranking in the Index of Economic Freedom, but because of what that improved ranking would mean for the American people.

These two important reports should be a wake-up call for policymakers that they need to start slowing the growth of spending. Thankfully, there are solutions that could be implemented, such as those included in The Heritage Foundation’s “Blueprint for a Responsible Post-COVID-19 Budget.”

Some recommendations found in the blueprint include reforming benefit programs, preventing out-of-control spending, and maintaining a pro-growth economic policy, among many others.

Unfortunately, the longer we wait, the more difficult will be the climb out of the fiscal hole that politicians have been digging for years. The time for action is now.