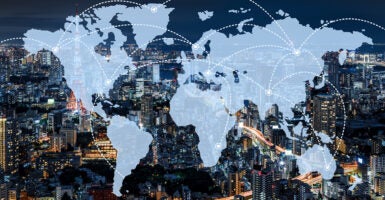 The United States' ranking in The Heritage Foundation's annual Index of Economic Freedom for 2021 slipped from 17th to 20th among the 178 nations scored, compared with last year. Its overall score fell from 76.6 to 74.8 out of 100. (Photo: MarsYu/Getty Images)

America’s economic freedom ranking has fallen to an all-time low, according to The Heritage Foundation’s 2021 Index of Economic Freedom.

The United States fell three places since last year and now ranks 20th in the world among countries evaluated, with an economic freedom score of 74.8 out of 100.

The U.S. “government spending [score is] at 62.2. That’s going to go lower,” Payne predicted during the event. “And sadly, the best category for America [is] labor freedom at 87.1. That’s going to get hurt really badly [by the pro-union policies of the Biden administration].”

The COVID-19 pandemic has posed challenges to economic freedom in America and around the world, said Terry Miller, director of The Heritage Foundation’s Center for International Trade and Economics and one of the editors of the index.

“Many of the measures implemented by governments, particularly the travel restrictions and lockdowns, are having a negative effect on economic freedom and all the benefits associated with it,” Miller said.

Speaking of the impact that COVID-19 has had on America’s economy, Payne said he worries that the federal government’s many stimulus packages have now become a “money grab” that will further harm the economy.

“We have dug ourselves into an even worse position,” Payne said of the increased spending during the pandemic. “Four rounds of fiscal stimulus have added fodder now to those who say we can do this all the time.”

It appears unlikely that the government will “tap the breaks” on spending, he said, but providing students with a good education and spreading a “can do” message across the U.S. may help to improve America’s economic future.

Without education “we lose control of our destiny,” the Fox Business anchor said. He added that people are kept in a state of economic dependency on the government unless they are told that opportunities are available to them and that they can do the hard work necessary to get ahead.

While America’s score fell by nearly two points, from 76.6, and three ranking positions since last year, the average global economic freedom score remained at a record high of 61.6 for the second year in a row.

Singapore received an economic freedom score of 89.7, making it the most economically free nation in the world. New Zealand came in second with a score of 83.9, while Australia took third place, scoring 82.4.

The index finds that nations with a high economic freedom score also enjoy greater levels of financial prosperity, and the people in those countries tend to be more educated, have better health, live longer, and even be more inclined to protect the environment.

“The 2021 Index continues to show that economic freedom is the standard, with the world collectively still ranking as ‘moderately free,’” Heritage Foundation President Kay C. James said in a statement. “But the free world is facing a formidable challenge from a rising communist China, which is seeking dominance over the world’s economy under decidedly unfree economic ideas.”

“While Hong Kong and Macau offer their citizens more economic freedom than is available to the average Chinese citizen, developments in recent years have demonstrated unambiguously that those policies are ultimately controlled by Beijing,” index editors Miller, Anthony Kim, and James Roberts said in a statement.

North Korea ranked last in the 2021 Index of Economic Freedom, followed by Venezuela, Cuba, Sudan, and Zimbabwe rounding out the bottom five.

The nations that saw the most improvement in economic freedom over the past year include the Republic of Congo, Mongolia, Benin, Eritrea, Sierra Leone, Bahrain, Saudi Arabia, the Solomon Islands, and Barbados.

A total of 97 economies received a ranking of “free,” “mostly free,” or “moderately free,” meaning that “54 percent of all nations and territories graded in the 2021 Index have institutional environments in which individuals and private enterprises benefit from at least a moderate degree of economic freedom in the pursuit of greater economic development and prosperity,” the index editors said.

It’s the responsibility of free nations to push back against governments who oppress economic freedom and “promote even greater freedom for the fiscal and physical health of their people,” James said.