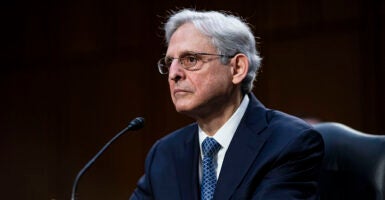 One of these children decided she wanted to terminate the life of the other.

She was the 17-year-old mother. The other was the 7-week-old baby in that mother’s womb.

The agency that arrested this pregnant teenager turned her over to the Office of Refugee Resettlement, which placed her in a shelter. She demanded an abortion. But the office, which had a policy of not facilitating abortions, declined to facilitate hers—as it sought to find her a sponsor.

Once a sponsor took custody of her, moreover, she would have been free to terminate her child in the United States.

But some lawyers took up the case of this pregnant illegal alien teen and sued the government on her behalf. The Fifth Amendment, they argued, guarantees abortions to pregnant foreign teenagers arrested while illegally trying to enter the United States.

The Department of Health and Human Services appealed to the U.S. Court of Appeals for the District of Columbia, where Merrick Garland—President Joe Biden’s current nominee to be attorney general—was chief judge.

Texas was joined by eight other states in filing an amicus brief that made a simple point: This illegal alien was free to leave the United States and pursue an abortion elsewhere.

A three-judge panel ruled 2-to-1 in favor of HHS.

Then-Judge Brett Kavanaugh was joined by Judge Karen Henderson in the majority. But Kavanaugh offered a weak and narrow argument.

The per curiam ruling he backed did not conclude that a teenage alien arrested while illegally entering the United States did not have a right to an abortion here. It implicitly conceded she did—which the Trump administration also conceded in its argument to the court.

The Government argues that this process—by which a minor is released from Health and Human Services custody to a sponsor—does not unduly burden the minor’s right under Supreme Court precedent to an abortion. We agree, so long as the process of securing a sponsor to whom the minor is released occurs expeditiously.

While voting with Kavanaugh on the court’s order, Henderson would not join its argument. Her “reasoning,” said a footnote to the order, “will follow in a separate statement to be filed within five days of the date of this order.”

Judge Patricia Millett, an Obama appointee, dissented. She argued that delaying the illegal alien’s access to abortion violated her purported constitutional right to have one.

The illegal alien’s lawyers immediately asked for the full appeals court to consider the case. It did—and issued a per curiam order permitting the district court to let the teen have the abortion. Garland, whose name is inscribed at the top of that order, mutely stood behind it.

Henderson was not mute. She again dissented. This time, she sharply criticized the weak position the Trump administration took and the wrong position accepted by Garland.

“Does an alien minor who attempts to enter the United States eight weeks pregnant—and who is immediately apprehended and then in custody for 36 days between arriving and filing a federal suit—have a constitutional right to an elective abortion?” Henderson asked.

“The government has inexplicably and wrongheadedly failed to take a position on that antecedent question,” she said. “I say wrongheadedly because at least to me the answer is plainly—and easily—no.”

Henderson argued that if the Fifth Amendment gives illegal aliens the right to an abortion inside the United States—as Garland’s court claimed—than the same logic would give them the right to contribute to political campaigns here or own guns.

“Having discarded centuries of precedent and policy, the majority offers no limiting principle to constrain this court or any other from following today’s decision to its logical end,” wrote Henderson.

“If the Due Process Clause applies to J.D. with full force, there will be no reason she cannot donate to political campaigns, despite 52 U.S.C. 30121’s prohibition on contributions by nonresident foreign nationals inasmuch as freedom of political expression is plainly fundamental to our system of ordered liberty.”

“I see no reason,” Henderson continued, “that she may not possess a firearm, notwithstanding 18 U.S.C. 9922(g)(5)’s prohibition on doing so while ‘illegally or unlawfully in the United States’ … inasmuch as ‘the Second Amendment conferred an individual right to keep and bear arms.'”

The illegal alien’s baby was aborted the next day.

Biden has now nominated the chief judge who oversaw this unforgettable case—involving an illegal border crossing—to be the nation’s chief law enforcement officer.

At Garland’s confirmation hearing, Republican Sen. Josh Hawley of Missouri asked him, “Do you believe that illegal entry at America’s borders should remain a crime?”

“I don’t know of a proposal to decriminalize but still make it unlawful to enter,” he said a moment later. “I just don’t know the answer to that question. I haven’t thought about it.”

So, what was Garland thinking, if anything, when a pregnant alien teenager—caught trying to illegally enter the United States—came before his court, seeking his blessing to terminate her child?