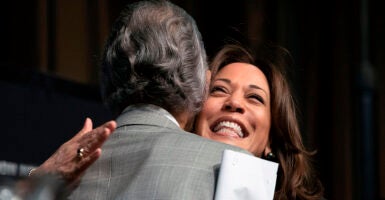 Liberals have spent the last five years fulminating about how former President Donald Trump reserved the bulk of his national TV interviews for Fox News. They fiercely protested the protective bubble Trump received from Sean Hannity or Jeanine Pirro.

So what did they say when Vice President Kamala Harris granted her first national interview as the veep to the Rev. Al Sharpton for his weekend MSNBC program? Hannity and Pirro aren’t known for racial hoaxes or virulent anti-Semitism.

No one would really consider Sharpton a journalist. He’s still running around lobbying with his group, the National Action Network. Last year, he touted how he would “get in the door and advocate” for Harris and Joe Biden if they were elected.

So, going all soft on Harris now, making her look good, might help him with his lobbying later. He didn’t ask Harris a single hard question. He didn’t ask about Gov. Andrew Cuomo. He didn’t ask about the new administration putting child immigrants in a Trump-era shelter. It was 15 minutes inside a protective bubble. Let’s review his question list.

1. “Let me ask you: What does Black History Month mean to you?” he said. Harris replied, “It means everything to me.” This softball was used in advertisements to promote the interview.

2. The self-involved Sharpton noted that he took Harris to his favorite soul food restaurant, Sylvia’s, when she was running for president. “You asked me a lot of questions about Shirley Chisholm, who I worked with when I was a kid,” he said. “You asked me a lot about Reverend Jesse Jackson that helped mentor me in activism. So I know you had a keen sense of history in even my own journey. Who are the people that influence Kamala Harris to be the vice president of the United States? … Who was important to Kamala Harris as a black historic figure?”

3. Then, the reverend preached: “You’re not only the first woman vice president, first black woman, first South Asian, South Pacific woman. You are also the first HBCU graduate, from Howard University. And you’re the first AKA member. … How much of Howard University … shaped you?”

4. On the coronavirus, Sharpton lectured: “[I]n the black community, we’ve had the problem of hesitancy and questioning, and, given a bad history, there is no reason why we wouldn’t. But you’ve been that champion of trying to convince us, including people like me that were reluctant, and you’re doing something specific. Tell us about Thursday.” She touted an event at a Washington, D.C., pharmacy that was held two days before the interview aired.

Sharpton credited Harris with convincing him to get a vaccine, which he did. But there was no question on how Harris and Biden claimed they had to start on vaccine distribution “from scratch,” which is flat-out false. Or a question about Harris’ statement last year she wouldn’t trust any vaccine released by Trump before the election.

5. He closed out by asking Harris how she’d like to be considered in half a century. “What do you hope they will say?” he asked. “You’ll probably still be around in some smart pantsuit and some Converse sneakers, but I’ll be gone. What do you hope they will say about Kamala Harris, the first black woman vice president of the United States, 50 years from now?” Fifty years from now? When she’s 106?

These weren’t so much questions as they were opportunities for Harris to dwell on her biography, influences, and inspirations, and celebrate Black History Month.

That’s all very uplifting if you’re a liberal person of color. But liberals shouldn’t try to lecture conservatives about journalistic skepticism and independence.