Why Technology Is Both Gift and Challenge to Think Tanks 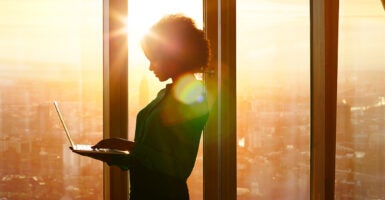 Jim McGann, director of the Think Tanks and Civil Societies Program at the University of Pennsylvania, once thought technology would lead to the downfall of many think tanks. Now, he says, it’s apparent that technology is one of the most powerful tools available to research institutions.

“I thought … technology would be what would make many think tanks become extinct,” McGann said during an online launch event Feb. 25 for his new book “The Future of Think Tanks and Policy Advice in the United States.”

The coronavirus pandemic forced many think tanks to accelerate their use of various technologies, such as YouTube, Instagram, and virtual meeting platforms, allowing the institutions to “weather the storm” and, in many cases, increase their influence, McGann said.

His book features a collection of essays from 21 American think tank presidents, including Kay C. James of The Heritage Foundation, Kenneth R. Weinstein of the Hudson Institute, and John Allen of the Brookings Institution.

It also features insights from three former think tank presidents who were influential in the development of such research institutions, including Edwin J. Feulner, former longtime president of The Heritage Foundation.

Intended as a resource tool for organizations and individuals across America to understand how to advance sound research, McGann’s book examines the ways in which “experts, evidence, think tanks, and policy advice have been challenged” significantly in the past four to six years and what can be done about it.

McGann says his book is intended to answer six specific questions through the essays written by the 21 presidents of think tanks.

The challenge many think tanks now face is balancing innovation and progress with preserving a commitment to excellent research standards, McGann says.

As president of The Heritage Foundation—named the “Think Tank with the Best Use of the Internet” three years in a row by McGann’s “Global Go-to Think Tank Index Report”—James writes in her essay that think tanks must remain “committed to both preservation and progress.”

Technology offers think tanks the ability to share data and research with new and broader audiences while maintaining standards of excellence, James adds:

Technology also helps us deliver our messages in more compelling and persuasive ways.

No longer is a white paper sufficient for reaching a mass audience. Videos, graphics, and emotive stories, combined with policy research and disseminated through traditional media, social media, and the internet, are more effective ways to reach audiences.

Due to these rapid changes in the technology space, it’s no longer sufficient for think tanks only to hire researchers. There is also a need for communications and digital experts, Frederick Kempe, CEO of the Atlantic Council, said during the book launch.

Although technology does serve as a powerful tool for sharing information, Brian Finlay, president of the Stimson Center, said technology also has created significant challenges for think tanks.

Technology “has grown the level of competition,” Finlay said, adding that the “sheer volume of policy advice that is being directed at policymakers is clearly having an impact and increasingly crowding out [the] voices” of think tanks.

But, in spite of the challenges, he said, technology is ultimately one of the most powerful tools available for think tanks to navigate current communications challenges and promote well-researched information to the broader public.

Technology is “really an opportunity and a lifeline for us to—if we can employ that technology appropriately—leverage our work and remain relevant in the policy space,” Finlay said.