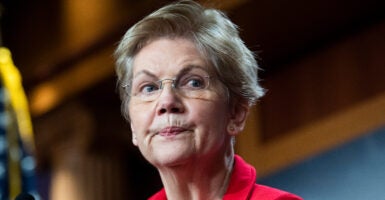 Sen. Elizabeth Warren released a new version of her wealth tax this week, and despite the Massachusetts Democrat’s messaging that the scheme would only impose a small fee on the wealthiest Americans, it’s actually a radical idea that, as I’ve written before, “would hurt the poorest and more vulnerable working-class Americans, and fuel the ever-increasing presence of Washington in our daily lives.”

The proposal is premised on the idea that the rich don’t pay their “fair share” of taxes. However, high-income Americans already pay the large majority of taxes, and the U.S. tax system is highly progressive when compared to those of other countries around the world.

Over time, high-income Americans have shouldered a larger and larger share of the cost of government. Even the 2017 tax cuts—reviled by the political left—reduced tax bills for the lowest-income Americans by 10% while only cutting taxes for the top 1% by 0.04%. After the tax cuts, the rich pay a larger—not smaller—share of income taxes.

In fact, by almost every measure, the U.S. has one of the most progressive systems of taxation in the world, in which high-income people pay the highest tax rates.

Looking at all federal taxes, the Congressional Budget Office shows that the top 1% pay an average federal tax rate of 32%. The data show tax rates decline with income, and the poorest 20% of the population pay an average tax rate of just 1%. The left-leaning Tax Policy Center found similar results.

Just looking at all federal taxes ignores the effect of state taxes, which tend to be less progressive, but make up a smaller share of total taxes paid.

The liberal Institute on Taxation and Economic Policy estimates that combined federal, state, and local taxes are still quite progressive. It found that in 2020, the top 1% paid a 34% tax rate. The poorest 20% of Americans paid an average 20% cumulative tax rate.

Considering only taxes, however, ignores transfers, such as tax credits for children, anti-poverty programs, and retirement benefits that primarily go to lower- and middle-income Americans.

Congressional Budget Office estimates show that when benefits are included, the lowest-income 60% of Americans are net beneficiaries, receiving more in social insurance benefits and means-tested transfer payments than they pay in taxes.

In contrast, the highest 40% of earners pay significantly more in taxes than they receive in benefit payments.

The highest-income 20% of Americans have increasingly shouldered a larger share of the cost of government, their net contribution increasing by more than 200% since the 1980s.

With soaring deficits and a long list of priorities for new spending, Democrats such as Warren have no shortage of proposals to increase taxes on the wealthy. Proposals such as the wealth tax will make the U.S. fiscal system even more unbalanced and would slow our economic recovery.

Excessively high tax rates on high-income earners in the 1950s and ’60s were followed by tax cuts that helped lift the economy in the late 20th century. That necessary shift provides compelling evidence that lower tax rates—even on the rich—are better for everyone.

And that wasn’t the first time tax cuts proved to be a major success. In the 1920s, tax rates were cut from 71% to 24%, and the economy grew by a massive 59%. In the early 1930s, top rates were raised back to 63%, which only made the Great Depression harder to climb out of.

President John F. Kennedy lowered the top tax rate in the 1960s, and President Ronald Reagan lowered it again in the 1980s. Both of those tax cuts were followed by two of the longest economic expansions in our history.

Although tax policy is not always the cause, nor the only solution, to all economic cycles, the strong correlation between high taxes and poor economic performance is compelling evidence that high taxes are not good policy.

As Congress rounds out its $4 trillion in coronavirus aid with an additional nearly $2 trillion of deficit spending, the pressure to raise taxes on high-income Americans will only grow. But returning to the tax policy of 1960 is not the way to restore American livelihoods.

Extracting a larger toll from those who already bear the bulk of government’s cost will not balance the budget. It will make our economic recovery more painful.