Japanese-South Korean Relations Need to Improve. The US Can Help. 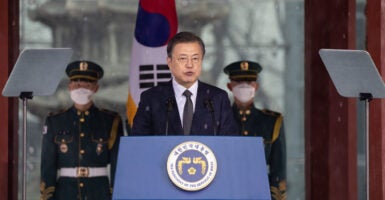 Japanese–South Korean relations suffer from centuries of built-up animosity due to sensitive historical issues and sovereignty disputes. Cyclical spikes in tensions are triggered by incidents that unleash nationalist furor in both countries. However, a recent development provides a means to improve strained relations.

“We must not let the past hold us back. We have to concentrate more energy on future-oriented development while resolving issues of the past separately,” said Moon, vowing to continue to seek resolutions to the painful historic issues arising from Japan’s 1910-45 occupation of the Korean Peninsula.

Tokyo should respond positively by focusing on cooperative measures to address common concerns. Washington should re-engage with both allies and play a strong behind-the-scenes role that urges remediation without appearing to publicly take sides.

In his remarks, Moon pledged forward-looking, cooperative policies with Japan that would benefit both countries and “facilitate stability and prosperity in Northeast Asia and the trilateral Korea-United States-Japan partnership.”

The most recent deterioration in bilateral relations was due to the Moon administration’s repudiation of the 2015 “comfort women” agreement, in which Japan apologized for forcing Korean women into sexual slavery for the Japanese imperial army during World War II, and agreed to pay compensation to the victims. The agreement was seen as insufficient by many in South Korea.

Another action that soured relations with Japan was a South Korean court ruling that declared that Japanese companies should pay compensation to victims of forced labor during the occupation.

Japan retaliated by imposing trade restrictions on exports which, in turn, led to South Korean boycotting of Japanese goods. Both countries threatened to withdraw from a mutual intelligence sharing agreement.

While previous conciliatory gestures from both countries have foundered on conditions and ill feelings, both countries should, as Moon advised, separate historic troubles from current issues.

The economic and societal devastation wrought by COVID-19 provides common ground for cooperation not only on vaccine production and distribution, but also on efforts to revive both economies.

Japan and South Korea have both highlighted the importance of this summer’s Tokyo Olympics, the former for national benefits of a successful event, the latter as a possible venue for resurrecting stalemated inter-Korean relations. While it remains uncertain whether the games will take place, they can be one of many mutually beneficial projects.

The United States has often been reluctant to become involved in the bilateral dispute, since it risks appearing to value one ally over the other. However, strained Japanese-South Korean relations hinder achieving U.S. strategic objectives in Northeast Asia.

Japan and South Korea are important economic partners, fellow democracies, and critically important allies against common security threats. Both countries are the foundation of U.S. foreign policy in Asia.

As such, the Biden administration should try to mend strained relations between America’s critically important Northeast Asian allies while avoiding perceptions of being an arbiter on contentious historical issues. Washington should encourage a dual-track approach on addressing historic and current issues.

The current administration can take a lesson from the Obama administration’s extensive behind-the-scenes diplomacy with Tokyo and Seoul, which facilitated the bilateral agreement on comfort women and improvements in bilateral relations.

President Joe Biden has a personal history of such involvement. While vice president, he personally interceded with both then-President of South Korea Park Geun-hye and then-Prime Minister of Japan Shinzo Abe to bring about a bilateral meeting between them.

Biden should call for a near-term virtual trilateral summit with Moon and Japan’s Prime Minister Yoshihide Suga with an invitation for in-person meeting as soon as COVID-19 conditions allow. The meeting should address areas of trilateral cooperation, and should also address regional threats from North Korea and China.

Unfortunately, there is much distrust and animosity between Tokyo and Seoul, but common adversity and threats can provide a basis for moving forward. The historic issues are unlikely to be solved to both sides’ satisfaction, but delinking them from current policies would be beneficial to all.

The United States shares common values, principles, and objectives with both Japan and South Korea. Washington should engage forthrightly with both to address the past, but focus on the future.