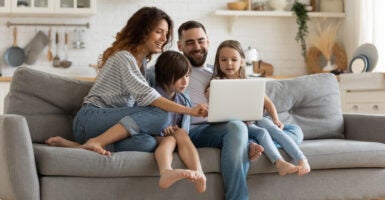 Faith-based foster care and adoption systems and secular agencies are both necessary pieces of the puzzle because of kids' diverse backgrounds, one participant says in a webinar on improving foster care. (Photo: Fizkes/iStock/Getty Images)

The nation would reduce “economic inequity” and “race inequity” if the federal government focused more on helping foster care children find a permanent family and create a life where they don’t rely on the government, a former health and human services official in the Trump administration says.

“We would move kids so they’re not spending two decades in our [foster care] system,” said Lynn Johnson, who served as assistant secretary for family support in the Department of Health and Human Services’ Administration for Children and Families from September 2018 through this past January.

An estimated 424,000 children are in foster care in the United States at any given time,  according to Children’s Rights, a New York City-based organization that advocates for the rights of children across the U.S.

Some 125,000 of these children are eligible for adoption, according to the La Verne, California-based David & Margaret Youth and Family Services, which helps provide resources for prospective foster parents.

Johnson—previously executive director of the Jefferson County Department of Human Services in Colorado, overseeing family services and child welfare programs—made her remarks in a Feb. 24 webinar called “Can a Divided Country Unite for Kids in Foster Care?” The event was co-sponsored by the National Review Institute and the American Enterprise Institute.

Panelists also discussed the lack of clarity of the data reported by the federal government about aspects of foster care.

When the government reports how many children have been taken into foster care or removed from their homes because of child neglect, “those numbers are just all over the place,” said Naomi Schaefer Riley, a resident fellow at the American Enterprise Institute described by webinar host Kathryn Jean Lopez as a leading writer and analyst on child welfare issues.

“Some states could report that 80% of their removals are [for] neglect,” Riley said. “In some cases, you might report 20%, and everyone has a different sense of what that means.”

“We collect a lot of paperwork, but … does any of it have a true meaning to get a child into a safe home or to prevent abuse or neglect?” Johnson said, adding that about 60% of removals are because neglect is a consequence of poverty. “Some states define neglect as poverty. Some states define it [differently], but when we get it at the federal level, we don’t have those real cryptic definitions from the states.”

Johnson cited the case of a young boy whose family didn’t have a stable income. He didn’t even have a mattress to sleep on and ended up in the foster care system for 10 years.

“I think of the costs in trauma and emotions for both the parents and for the children,” Johnson said, suggesting the government could have done more to provide that family with the job opportunities and help it needed, rather than moving the boy into foster care.

Also discussed was whether faith-based foster care systems should be allowed to refuse to place children with same-sex couples.

The Supreme Court in 2020 agreed to decide whether Philadelphia—and, by extension, other jurisdictions—legally may exclude Catholic and other faith-based agencies from the city’s foster care system if they refuse to place children with same-sex couples.

Johnson said faith-based foster care and adoption systems and secular agencies both are necessary pieces of the puzzle because of the diverse backgrounds the kids are coming from.

“We have got to remember the kids and why we do this work, and then deal with the other stuff later,” Johnson said, “but don’t make it a reason why these kids can’t get taken care of.”