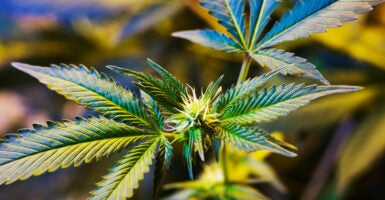 Virginia lawmakers passed legislation legalizing marijuana Saturday, making it poised to be the 16th state—and the first in the South—to legalize the drug for recreational use.

The measure passed the state House 48-43 and the state Senate 20-19. Not a single Republican in either chamber voted in support of the measure.

“This, to me, is a justice bill,” said state House Majority Leader Charniele Herring on the floor. “While it has flaws and is not a perfect bill … I think this moves us a step in the right direction.”

Though Virginia Democratic Gov. Ralph Northam championed the legislation and is expected to sign it into law, marijuana sales would not begin until January 2024, and possession of the drug would remain illegal until then, according to the bill text. The bill would establish a marijuana regulatory agency beginning this summer.

The bill would allow for adults 21 and over to possess up to one ounce of marijuana and would allow limited home cultivation. It also establishes various excise taxes on the plant, with revenues going toward pre-K education, substance abuse treatment programs, and other public health measures.

A portion of the tax revenues would also go toward the Cannabis Equity Reinvestment Fund, which gives scholarship and provides workforce training for communities disproportionately affected by drug enforcement.

Northam first endorsed legalization in November, calling on the Democratic Legislature to pass legalization during his State of the State address. Virginia’s path to legalization was unlike that of most states, who adopted the measure via ballot initiatives.