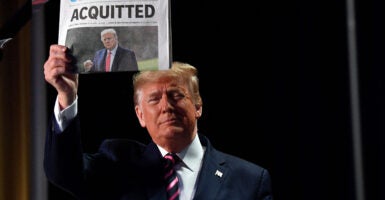 Then-President Donald Trump seems pleased with this USA Today headline as he arrives to speak at the 68th annual National Prayer Breakfast on Feb. 6, 2020, in Washington. (Photo: Nicholas Kamm/AFP/Getty Images)

When the House impeached Donald Trump in late 2019 on ambiguous charges of abuse of power and obstruction of Congress, many legal experts expressed concern about normalizing impeachment—previously a very rare procedure.

“Abuse of Power: Inside the Three-Year Campaign to Impeach Donald Trump,” my 2020 book, outlines how Trump was the first president impeached on noncriminal allegations.

Unlike the charges in the first impeachment, federal statutes cover both incitement and insurrection—the basis of the charge in the House’s second impeachment of Trump.

Nevertheless, the second impeachment, just more than a year later, may have exacerbated such concerns of making impeachment a routine process.

Below is an adapted excerpt from the book that addresses concerns about normalizing impeachment.

Jonathan Turley, a law professor at George Washington University and a Democrat, made it clear before the House Judiciary Committee that he did not vote for Trump, opposed the president’s policies, and deplored his behavior in office.

Turley argued that the House could have made a plausible case for impeachment had it not rushed the investigation.

“If the House proceeds solely on the Ukrainian allegations, this impeachment would stand out among modern impeachments as the shortest proceeding, with the thinnest evidentiary record, and the narrowest grounds ever used to impeach a president,” Turley told the lawmakers. “That does not bode well for future presidents who are working in a country often sharply and, at times, bitterly divided.”

He later addressed both of the House’s potential impeachment charges, obstruction of Congress and abuse of power.

“Basing impeachment on this obstruction theory would itself be an abuse of power—by Congress. It would be an extremely dangerous precedent to set for future presidents,” Turley said, later adding: “The problem is that we have never impeached a president solely or even largely on the basis of a non-criminal abuse of power allegation.”

House Speaker Nancy Pelosi, D-Calif., spoke quickly in her press conference one day after Trump’s acquittal in the Senate, the same week in which she ripped the text of his State of the Union address.

“Now the Senate has spoken in terms of any punishment to the president,” Pelosi said. “He’s impeached forever no matter what he says or whatever headlines he wants to carry around. You’re impeached forever. You’re never getting rid of that scar.”

Later that day, Trump held a victory rally in the East Room of the White House with numerous Republican members of Congress, Cabinet members, and his legal team in attendance. They included Trump lawyer Robert Ray, who partly concedes the speaker’s point.

“If this is a super censure, Speaker Pelosi says it’s a permanent blemish and he is impeached forever; what also, I think, lasts forever is the judgment of acquittal,” Ray said in an interview for the book. “Republicans said President Clinton’s legacy was indelibly stained by impeachment. There is still history’s judgment of impeachment. The jury is also out.”

Unlike many, including Trump, Ray was uncertain the Trump impeachment set a course of freewheeling impeachments.

Similarly, now both parties have faced mostly partisan impeachments over a 21-year span.

“It reminds me of the demise of the independent counsel statute after both parties were victimized by it,” Ray said. “We may have the same thing here. Both parties will think it through before moving forward on impeachment.”

Sen. Mike Lee, R-Utah, a constitutional law expert, said he thought the legacy of the first Trump impeachment could go either way.

After Pelosi called for the impeachment inquiry in late September, there was no turning back and a vote would be inevitable. Otherwise, she would look like a paper tiger.

But she did have the option of backing away, based on historical precedent.

The Whig Congress wanted to impeach President John Tyler and accused him of starting an illegal investigation, withholding information from government agents, withholding actions necessary to “the just operation of government,” and “shameless duplicity, equivocation, and falsehood.”

Republicans pushed an impeachment investigation of President Grover Cleveland, claiming he was guilty of high crimes and misdemeanors for misusing the appointment power.

Some Republicans tried to impeach President Harry Truman, accusing him of “attempting to disgrace the Congress of the United States,” “repeatedly withholding information from Congress,” and “making reckless and inaccurate public statements, which jeopardized the good name, peace, and security of the United States.”

Remember these impeachments? No. Because they didn’t happen.

Leadership is not only about being the loyal opposition and fighting the good fight. It’s also about walking your party hardliners back from the precipice.

The Constitution makes impeachment relatively easy and removal very difficult. Still, the House has seldom pulled the trigger despite requiring no more than a simple majority vote to impeach a president.

Normalizing impeachment by the House as some type of supercensure likely will have the effect of desensitizing the public to a legitimately impeachable offense—such as actual high crimes by a future president.