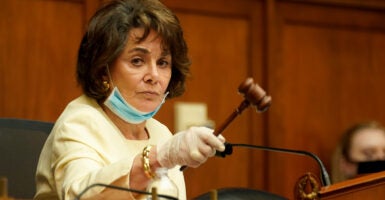 "It’s a sticky wicket because of our Constitution, but we need to examine and be frank with each other about what is taking place," says Rep. Anna Eshoo, D-Calif., pictured May 14, 2020, during a House committee hearing. Eshoo is co-author of a letter to cable companies asking whether they intend to renew contracts with Fox News and other conservative news outlets. (Photo: Greg Nash-Pool/Getty Images)

A House subcommittee held a virtual hearing Wednesday on how to weed out what Democrats call “disinformation and extremism” in the media.

“The prolonged severity of the COVID-19 pandemic and the attack on our Capitol on Jan. 6 have driven home a frightening reality: the spread of disinformation and extremism by traditional news media presents a tangible and destabilizing threat,” Pallone and Doyle said in a joint statement announcing the hearing.

The hearing came only two days after Reps. Anna Eshoo, D-Calif., and Jerry McNerney, D-Calif., sent a letter to a dozen different cable companies, including Comcast, AT&T, and Cox Communications, questioning whether they would renew contracts with One America News Network (OANN), Newsmax, and Fox News.

“Are you planning to continue carrying Fox News, Newsmax, and OANN … ? If so, why?” the California Democrats asked.

“Experts have noted that the right-wing media ecosystem is ‘much more susceptible … to disinformation, lies, and half-truths,’” they wrote, quoting the book “Network Propaganda” by Yochai Benkler, Robert Faris, and Hal Roberts.

Some conservative leaders, such as Rep. Cathy McMorris Rodgers, R-Wash., view the left’s efforts to stop the spread of “misinformation” as a direct threat to Americans’ First Amendment right to free speech.

“Every journalist—from MSNBC and CNN to The New York Times—should be concerned by the majority’s actions,” McMorris Rodgers said in her prepared statement at Wednesday’s hearing. “And anyone who values free speech and a free press should be worried.”

Pallone and Doyle pointed to the need for fact-based reporting as a central reason for the hearing, titled “Fanning the Flames: Disinformation and Extremism in the Media.”

Four witnesses testified and engaged in several hours of Q&A, including Soledad O’Brien, a CNN and NBC veteran who is anchor of Hearst Television’s “Matter of Fact.”

The others were Emily Bell, a journalism professor at Columbia University; Kristin Danielle Urquiza, co-founder of the organization Marked by COVID; and Jonathan Turley, a George Washington University law professor.

Here are three key highlights from the hearing.

In her opening remarks, O’Brien argued that news platforms can curb dissemination of misinformation by refusing to interview “liars” on TV.

“Do not book people to lie on your show because it elevates them and presents a lie as another side,” O’Brien said.

It is the job of a journalist to verify information and “every perspective does not deserve a platform,” she said.

It is not the role of Congress to restrict media platforms or determine who appears on news programs, O’Brien argued, but rather journalists should provide the public with facts, not merely opinions.

Turley, the law professor, said he is far less confident in the media’s ability to determine what is a lie.

“I don’t think it is fair to say ‘I am in favor of free speech and free press as long as you are not a liar, as long as what you are saying is not untrue,’” Turley said.

He said the question remains “who is the arbiter” of truth?

“What is the meaning that someone is a liar and someone is being untruthful?” he asked.

Regarding the role of the government, Turley said, the First Amendment does not allow Congress to determine who is a truth-teller and allowed to appear on the nightly news.

During the hearing, lawmakers and witnesses argued their views on the need for restrictions on the media or the need for freer markets that allow more voices to be heard across America’s news landscape.

“Digital media and the lowering of barriers has helped elevate previously marginalized and ignored voices, and it’s made all public discord much more diverse,” Bell, the Columbia University journalism professor, said. “But an open market, without regulation, will always favor bad actors over good.”

Although individual choice and free markets are part of the solution to curbing misinformation, she said, “I believe that there is a policy role here, which is not about infringing [on] the First Amendment, but which is about strengthening ways in which we can have a more vibrant, truthful news environment.”

But Turley argued that any government regulation of the press will not produce a “less objectionable product” but instead an “official product, which is exactly what the free press is designed to avoid.”

Instead, the role of Congress and the media should be to offer the public information transparently in order to rebuild faith in both the press and political leaders, Turley said.

“Here, we cherish free speech and a free, independent press,” McMorris Rodgers said in her opening remarks. “We believe in dialogue and in the battle of ideas. Rather than censor and silence constitutionally protected speech, the answer is more speech. That’s the American way.”

Republicans repeatedly raised concerns about the letters to cable companies from Eshoo and McNerney.

“Today’s hearing, along with the majority letters that target right-wing cable outlets, are really a dangerous escalation in the left’s crusade to silence anyone who does not agree with their ideology,” McMorris Rodgers said.

The California Democrats’ letters asked the 12 cable companies a series of questions, including “[h]ow many of your subscribers tuned in to Fox News, Newsmax, and OANN … for each of the four weeks preceding the Nov. 3, 2020 elections and the Jan. 6, 2021 attacks on the Capitol?”

Rep. Bob Latta, R-Ohio, said what discurbed him most about the letters was that they specifically targeted three conservative media outlets.

But Eshoo staunchly defended the content, pointing out that “the letter[s] ask the companies questions,” and do not assert that Congress should restrict the freedom of the press.

“We have a problem in this country; it’s a large one,” Eshoo said. “It’s a sticky wicket because of our Constitution, but we need to examine and be frank with each other about what is taking place in the country.”

Social media companies play a role in spreading misinformation, but “traditional media outlets should not escape scrutiny or accountability,” McNerney said of why he co-authored the letters with Eshoo.