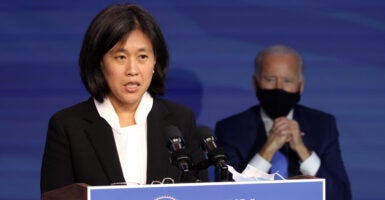 Katherine Tai will testify on Thursday before the Senate Finance Committee, as she seeks to become the U.S. trade representative in the Biden administration.

If confirmed, Tai will serve as the chief trade negotiator for the U.S. and be tasked with carrying out the administration’s trade strategy.

Unlike on other policy areas, however, this administration’s objectives on trade are unclear.

Senators should take this hearing as a timely opportunity to get clarity on President Joe Biden’s vision for trade policy by pressing Tai on three key issues: trade promotion authority, the World Trade Organization, and ongoing trade agreement negotiations, all of which are vital to the task of revitalizing America’s economic livelihood.

—Trade promotion authority: This law allows the president to get expedited consideration of trade agreements by Congress, provided that he follows a specific set of rules and procedures during negotiations.

Congress is not permitted to amend trade agreement implementing legislation under this process. All existing trade agreements, except one with Jordan, were passed using this tool.

Trade promotion authority is set to expire on July 1, and without it, the Biden administration will have a hard time getting trade agreements approved by Congress.

Senators should ask Tai whether the Biden administration plans to request a renewal of trade promotion authority. Tai should also be asked whether she commits to being transparent with Congress regarding trade negotiations.

It has no independent power to enforce its decisions. Nonetheless, the global trade forum has contributed to the strength and stability of the global economy, helping to boost trade growth, resolve numerous trade disputes, and support the integration of more countries into the trading system.

Equally important is that the World Trade Organization is a necessary institutional tool, with which America and its allies can more effectively push back against China’s mercantilism.

As The Heritage Foundation has noted, “China has used its economic power to bully, bribe, corrupt, and steal its way up the global economic supply chain, with only limited resistance from the WTO. It is past time to plug the loopholes that allow this.”

Senators should ask Tai whether the Biden administration is committed to maintaining an active role in reforming and upgrading the World Trade Organization and whether it intends to allow for the revival of the appellate body.

Tai should also be asked to commit to working with U.S. allies, such as South Korea and the United Kingdom, during reform efforts.

Those agreements allow Americans to exchange goods and services with individuals around the world more freely.

Senators also should ask Tai what concrete steps she plans to take to complete the ongoing trade agreement negotiations with the United Kingdom and Kenya. Tai should also be pressed on which additional negotiations will be top priorities for the administration.

While that’s not an exhaustive list, Tai will be the key decision-maker on those important trade issues.

Biden and Tai have been vocal about the administration’s intentions to strengthen relationships with allies.

Advancing the freedom to trade and America’s overall economic freedom cannot be a back-burner issue. Tai’s upcoming confirmation hearing should be really about prioritizing these issues and ensuring her commitment to them as America’s trade representative.