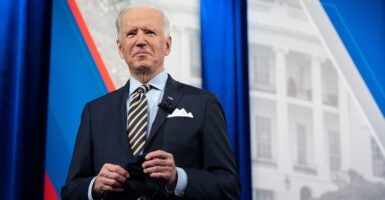 Democratic President Joe Biden holds a face mask as he participates in a CNN town hall at the Pabst Theater in Milwaukee, Wisconsin, Feb. 16, 2021. (Photo: Saul Loeb/AFP via Getty Images)

Appearing at a friendly CNN town hall event this week, President Joe Biden dropped a string of untruths on issues both large and small.

One of the president’s most egregious falsehoods was the claim that “we didn’t have [the vaccine] when we came into office.” The first shot was administered back on Dec. 14, 2020.

Glenn Kessler, lead fact-checker for The Washington Post, quickly jumped into action on Twitter, explaining that this was merely a “verbal stumble, a typical Biden gaffe, as he had already mentioned 50 million doses being available when he took office. Former Trump officials should especially cool the outrage meter, as it just looks silly.”

Castigating those who pointed out the lie is a weird thing for someone charged with verifying factual information to do.

It was a strange coincidence, indeed, that Biden’s “verbal stumble” corresponded perfectly with the concerted administration-wide effort to mislead Americans regarding the president’s new vaccination plan.

Last week, Vice President Kamala Harris had herself accidentally stumbled into numerous similar gaffes, saying there had been “no national strategy or plan for vaccinations,” that the new administration was “starting from scratch on something that’s been raging for almost an entire year,” and that there “there was no stockpile … of vaccines.”

When a Twitter follower asked him how he determines what constitutes a “verbal stumble” or a lie, Kessler explained: “People screw up on live television. Biden with his stutter especially does so.”

Ah, the stutter. How quickly the media has taken to the Biden’s stutter excuse.

“The Democratic presidential candidate’s gaffes may be rooted in a little-understood disability,” The Hill theorized when Biden first shared the story of his early struggles with stuttering.

Do those who similarly struggle usually steal entire speeches—nay, life stories—from others? Do they coherently say things that are provable lies? I suspect not.

It is odd, as well, that a fact-checker would contend that Biden must have had a “verbal stumble” because he had previously admitted the truth on the issue.

For one thing, it seems unlikely this was the standard used for former President Donald Trump’s contradictory ramblings. And though I’m not a professionally trained fact-checker myself, I’m relatively certain that most politicians have the skill set to tell the truth on a topic in one instance and then lie in another.

All of these defenses of Biden rely on the notion that the president wouldn’t intentionally mislead us. Which is also weird, considering he is a notorious fabulist and fabricator.

Now, many Americans might be unaware of the history of Biden’s untruths. Because, while fact-checkers may sporadically, if tepidly, correct falsehoods uttered by Democrats, or retroactively admit to them, they also regularly offer rationalizations, excuses, justifications—rich layers of contextual detail—to safeguard them from criticism, which is a complete abdication of the job they ostensibly claim to do.

Perhaps the most mendacious “fact-checker” is CNN’s Daniel Dale, who produces prodigious amounts of disingenuous partisan clickbait. Yesterday, Dale also bored into the soul of Biden to discern exactly what the president “meant,” which, it conveniently turned out, was the opposite of what he said.

Then again, Dale noted back in September that Biden ” makes some false and misleading claims” but “assertions of fact have been largely factual.” Tautology aside, a quick fact-check of this claim earns a gaggle of Pinocchios. Then again, Dale is just a left-wing columnist. Nothing wrong with it. But no one needs to pretend otherwise.

The fact is—if you’ll pardon the expression—this kind of partisan gruel would never have existed in a reputable newsroom 30 or 20 years ago. Yet, it thrives in an age in which the number of Twitter followers and hits are valued over fact-gathering.

There has been no price to pay for this destruction of political journalism—only high ratings. Perhaps it will change post-Trump.

It’s not only that the fact-checkers are objectionable but also that the idea of fact-checking is un-journalistic. There is something more insidious about fact-checks than the average hackery.

One might be able to look past the five-year abandonment of journalistic ethics and professionalism if reporters and fact-checkers were equal-opportunity sticklers.

The problem wasn’t the adversarial relationship journalists had with those in power—though the self-aggrandizement and navel-gazing were insufferable. It’s the selective deployment of these ethics as now displayed with a different administration. And no one exemplifies the problem better than the self-anointed fact-checkers.