Planned Parenthood More Involved in Transgender Revolution Than You Realize 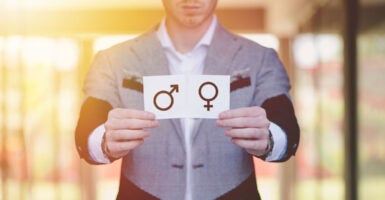 It’s not clear why Planned Parenthood is participating in these activities at all. At the least, it should be far more difficult to receive cross-sex hormone treatments at Planned Parenthood. (Photo: Emilija Manevska/Getty Images)

In a post on her Substack account, Shrier describes reading a Twitter thread from a former Planned Parenthood employee—a person she later interviewed. In both the thread and interview, the former employee highlighted the abortion giant’s increasing involvement in prescribing hormone treatments to patients.

‘[T]hey still provide vital services for women,’ she wrote on Twitter, and anti-abortion activists ‘will jump at any opportunity to smear them.’ But she went on to write: ‘Having said that, their recent roles in trans activism are abhorrent, and they’re digging their own grave.’

The Planned Parenthood clinic where she worked was located in a small town of roughly 30,000. Abortions were the clinic’s ‘bread and butter,’ something this employee fully supports. But, she noted, ‘trans-identifying kids are cash cows, and they are kept on the hook for the foreseeable future in terms of follow-up appointments, bloodwork, meetings, etc., whereas abortions are (hopefully) a one-and-done situation.’

As Shrier said in her post, revenue statistics on Planned Parenthood’s treatment of transgender patients are difficult to find, and few numbers are available.

For example, the Planned Parenthood League of Massachusetts stated in its fiscal 2018-2019 annual report that over 300 patients received “Gender Affirming Hormone Therapy.”

The way these treatments appear to be distributed at the clinics is difficult to assess because Planned Parenthood’s marketing materials are vague; as far as I can tell, nothing online explains its process of prescribing hormone treatments.

But pieces of the puzzle are available online from others.

The clinic employed a gender counselor who had ‘no actual professional credentials or formal training other than being MtF’ (that is, a male-to-female transgender person).

Adolescents would come and speak to this gender counselor and Planned Parenthood would then forward the counselor’s ‘notes to an actual licensed mental health professional somewhere off-site, and rubber stamp approve the patients to begin their transition. This is basically how they circumvented the requirement to speak to an actual counselor,’ according to the employee’s Twitter post.

Medical doctors and nurses are on staff at individual Planned Parenthood clinics and affiliates, but not one member of Planned Parenthood’s leadership team has any medical training or experience that would qualify him or her to know even the basics of using “gender-affirming hormone therapy” at a managerial level.

Stories of clients receiving hormone treatments via Planned Parenthood abound on the internet. It’s wise to approach these posts with caution, since we don’t have independent corroboration with Planned Parenthood and often the writers don’t post their real names.

However, we have enough posts and the stories are so similar that these written accounts support the former Planned Parenthood employee’s claims, at least anecdotally.

A search of threads on the popular website Reddit reveals multiple firsthand accounts mirroring many aspects of the former employee’s tweets, including the fact that it was relatively easy to get what this person refers to as “hormone replacement therapy” but doctors call cross-sex hormone therapy.

On a thread posted two years ago, another person described her experience: “I called PP [Planned Parenthood] and told them I needed to set up an initial consultation for cross-hormone therapy; they booked me, did some bloodwork, and when I came back they wrote me a scrip [sic] and set a follow-up. Done deal.”

Another person, who claimed at the time to be “nonbinary,” posted on Reddit a year ago about the experience of being prescribed testosterone at a Planned Parenthood clinic in Virginia:

They had me do a finger prick to test my hemoglobin or something (lol) but other than that they didn’t make me take any hormone tests because they said the way that they judge things is by meeting up with me every three months at first to see if I’m getting to the results I want and adjusting my dosage. They started me on .25 ml/week, which is a pretty low dose. So I didn’t have any blood work done, just a finger prick and a urine sample and that was it. I got my prescription for .25 ml/week that day and was able to pick it up at a CVS down the street in about two hours.

I read dozens of similar stories of people who wanted to transition, and the process seemed stunningly simple. They just set up an appointment at a nearby Planned Parenthood and quickly and easily received prescriptions for cross-sex hormone therapy. Some had seen a psychologist and received a green light; others didn’t mention it if they had.

Of course, the risks of cross-sex hormone therapy, or what some imprecisely refer to as “hormone replacement therapy,” are serious. Shrier relayed the risks in her post:

Risks include deepened voice, enlarged clitoris, increase in red blood cell count and greater risk of heart attack, infertility, vaginal and uterine atrophy, endometrial cancer—as well as all the unknown risks [that] come with any major and novel intervention.

Planned Parenthood has over 600 “health centers.” If each affiliate provided cross-sex hormone treatment to 300 patients a year, the statistic cited by one affiliate in Massachusetts, that’s upward of 180,000 people per year. And it’s almost as easy as setting up a dinner reservation.

I emailed Planned Parenthood’s national press office for comment about the organization’s services, but did not receive a reply as of this writing.

It’s no secret that Planned Parenthood is an abortion industry giant, one that wrongly raked in $1.5 billion in taxpayer money over three years, according to a 2018 report.

It’s unfortunate that Planned Parenthood has turned its attention to the transgender revolution, prescribing cross-sex hormone therapy quickly, easily, and often to the detriment of the health of those seeking the treatment.