If France Can Reject Wokeness, So Can We 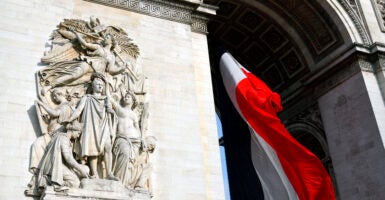 French President Emmanuel Macron vows that not a single piece of French history will be torn down. Pictured: the Arc de Triomphe de l'Etoile in Paris. (Photo: Despite Straight Lines/Paul Williams/Getty Images)

An interesting piece in The New York Times highlights a ferocious blowback against woke ideas in France.

“The threat is said to be existential,” foreign correspondent Norimitsu Onishi writes, adding:

French historian Pierre-André Taguieff, quoted in The New York Times piece, said the French people are exasperated by phrases such as “systemic racism’’ and “white privilege,” which he says are an “artificial importation” from America.

For those paying attention, it’s hard to deny that these phrases haven’t become nearly as common as the word “the” in modern American left-wing social commentary.

It may be a bit rich for France to blame wokeness on America. After all, a whole host of French postmodern thinkers from Michel Foucault to Jacques Derrida have had extensive influence in American academia, the locus of the wokeness.

Nevertheless, it’s a positive development that even left-leaning French leaders such as Macron see the woke ideology—once loosed from ivory towers and unleashed on society—as a monumentally destructive force.

When mobs began taking down statues and defacing monuments throughout the United States and the rest of the West last summer, Macron was adamantly opposed to giving in to the war on history.

Macron said in a televised address in June that “the [French] republic will not erase any trace, or any name, from its history … it will not take down any statue.” He said that it was important to look at history with an eye toward finding the truth rather than denying what occurred.

The French blaming America for these ills is predictably French. Still, there’s no question that large swaths of elite institutions in America have swallowed up and adopted the most radical and extreme ideas that would have at one time been unthinkable.

When so-called anti-racist Ibram X. Kendi, director of the Center for Antiracist Research at Boston University, and Robin DiAngelo, author of “White Fragility: Why It’s So Hard for White People to Talk About Racism,” are given such constant positive media attention, it’s a telling sign of where these elite institutions are going.

DiAngelo’s ideas are for the most part absurd, and Kendi’s are tyrannical, yet they are the tip of the spear for bringing critical race theory and similar doctrines to every newsroom, boardroom, college campus, and K-12 school in America.

The trend is undeniable and it’s not just a passing fad. At least, it won’t be if we do nothing about it and ignore the issue.

Many on the more mainstream left want to smooth over or deny what ideas such as critical race theory really are or what Black Lives Matter, the activist organizations as opposed to the phrase, actually aim to do.

But that actually makes those doctrines more dangerous and more insidious.

Sure, the woke radicals are hardly a majority in America. But they clearly have outsize influence on the direction of our culture and its projection to the outside world.

If my country is to be stereotyped, I’d much rather that other people think we are a bunch of wild cowboys than know-nothing activists splashing paint on statues of George Washington in Portland, Oregon.

It’s heartening to see other countries reject some of the woke lunacy, but it must be seen as yet another canary-in-the-coal-mine moment.

If France is worried about this development, Americans who remain moored to common sense and the most essential principles of our founding must work to educate their fellow Americans and root out this menace.

For good or ill, America’s global cultural influence is enormous. In one sense it serves us well, as we are the most relentlessly assimilatory people in human history. But what happens when America’s cultural milieu and exports have been corrupted, turned to something destructive to ourselves and others?

If the well is poisoned here, it will be poisoned everywhere.

France is not America. While the French may understand the problem of wokeness, they are more likely to see ruthless, enforced secularism or ethnic nationalism as a solution to the problem.

That won’t work in America, nor would it solve the issue at hand.

America needs a restoration of informed patriotism, a reinvigoration of the culture of free speech over cancel culture, and most importantly, an awareness of the hellish oblivion that woke ideas—taken to their logical extent—will leave us and future generations.

As with all totalitarian societies, the only people who will thrive in that fundamentally changed America won’t be racial minorities or the “powerless” for whom they claim to work. No, it will be the activists, apparatchiks, and those best at showing fealty to the new dogma.

Is this the kind of country we want to live in?

Bari Weiss, a liberal who was pushed out of The New York Times by woke fanatics, was correct in diagnosing ways to fight the hostile takeover. It’s time we educate, fight back, and build new institutions to counter the ones that have been poisoned.

Every day I hear from those with means with children at private schools who are being brainwashed; people who run companies where they are scared of their own employees; people who donate to their alma mater even though it betrays their principles. Enough. You have the ability to build new things. If you don’t have the financial capital, you have the social or political capital. Or the ability to sweat. The work of our lifetimes is the Great Build. Let’s go.

America is undoubtedly better off when our chief exports include cars and John Wayne rather than wokeness.

If France can recognize the problem, we as Americans can do what we do best: Fix it.