With the Return of Parler, Social Media Users Have More Choices 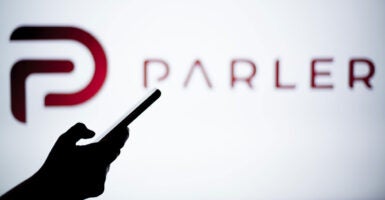 Parler’s social media service restarted on Sunday after being offline for over a month due to Amazon, Google, and Apple removing Parler from their platforms and app stores. Parler now has a new interim CEO, a new logo, new servers, and a renewed commitment to provide a place where users can speak freely.

Parler calls itself “the world’s town square,” and its homepage states: “Speak freely and express yourself openly, without fear of being ‘deplatformed’ for your views.”

Mark Meckler, the new interim CEO, posted at the relaunch: “We are committed to continuing to fulfill our role as the premier platform for free speech, data sovereignty and civil discourse.”

Parler had more than 20 million users and became the No. 1 free app on Apple’s App Store in January. Apple suspended Parler after the Jan. 6 Capitol riot, claiming the service permitted content that included threats of violence and illegal activity.

Did Parler truly host a disproportionate amount of posts that helped lead up to the riot? According to the numbers, no.

George Washington University’s Program on Extremism has collated a list of more than 200 charging documents filed in relation to the Capitol riot investigation.

Among the data are a mix of public posts and private messages sent on multiple platforms, some of which discuss plans to go to the “Stop the Steal” rally, threaten violence, or include images, videos, and livestreams from the Capitol building breach.

Forbes reviewed the data and found that of the 223 individuals with charging documents, the most commonly used platform—with 73 references—was Facebook.

YouTube was the second-most referenced, with 24. Instagram—a company owned by Facebook—came in third, with 24 references. Parler only had eight.

This data contradicts the claims and explanations used by Amazon, Google, and Apple for removing Parler from their servers.

Parler is now at an inflection point, and tech followers will be watching how quickly and broadly Parler users resume posting on the app.

Parler needs to overcome the public perception of its permissiveness for violent speech, as established by Big Tech companies.

Meckler stated in an interview with Neil Cavuto Tuesday that Parler is continuing negotiations with Apple and, in part because of the Forbes findings from its Capitol riot data review, he is optimistic that Parler will be back on Apple’s App Store.

Meckler also stated that former President Donald Trump is welcome on Parler, just like anyone else, to practice free speech.

Trump was extremely active on Twitter, but the company regularly attached warnings and labels to his tweets related to COVID-19 and the election before permanently suspending his account after the 6 Capitol riot, citing as its reason “the risk of further incitement of violence.”

Twitter has aggressively suspended thousands of accounts of conservatives since the 2020 election, including known names, such as Michael Flynn, Project Veritas, and Mike Lindell.

Twitter’s CEO, Jack Dorsey, was recorded on Jan. 8 stating to more than 5,400 employees, “We know we are focused on one account [Trump] right now, but this is going to be much bigger than just one account, and it’s going to go on for much longer than just this day, this week, and the next few weeks, and go on beyond the inauguration.”

In its apparent haste to suspend accounts, Twitter may be failing to comply with its own notice policies.

Twitter policies indicate that when the company permanently suspends an account, it notifies the account holder; explains which policy or policies were violated by which content; and permits “violators” to appeal the suspension. According to many complaints, it has violated one or more of these policies.

It is critical that individuals and companies hold Twitter and other Big Tech companies accountable to establish clear and specific guidelines and to consistently uphold them, regardless of the user’s political opinion.

Now that Parler is back online, it has updated its own “Community Guidelines.” Of note, Parler’s guidelines state:

Our goal is to provide all community members with a welcoming, nonpartisan Public Square. While the First Amendment does not apply to private companies such as Parler, our mission is to create a social platform in the spirit of the First Amendment to the United States Constitution.

We prefer that removing users or user-provided content be kept to the absolute minimum. We prefer to leave decisions about what is seen and who is heard to each individual.

In no case will Parler decide what [content will] be removed or filtered, or whose account will be removed, on the basis of the opinion expressed within the content at issue. Parler’s policies are, to use a well-known concept in First Amendment law, viewpoint-neutral.

In short, Meckler explained that Parler users can say what they want, as long as it’s legal. With Parler back online, social media users have more choice among platforms. Meckler said Parler is not intended to be a conservative platform, but it is a platform where conservatives are welcome.

Not just conservatives, but all users benefit from a bigger town square in which they can speak freely.