11 Times a Gun Stopped Matters From Getting Worse 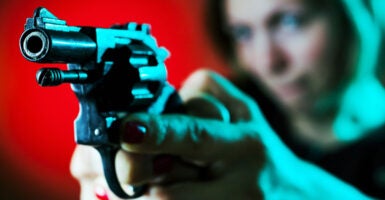 A woman shot and killed her abusive boyfriend as he forced his way into her home after assaulting her earlier in the week, police said. (Photo illustration: WIN-Initiative/Getty Images)

We’re in a new year, but gun control advocates are back to their same tactics of wanting to make it much harder for law-abiding citizens to exercise their Second Amendment rights.

Perhaps one of the worst offenders is Rep. Sheila Jackson Lee, D-Texas, who recently introduced a bill to create a national gun license and registration program that effectively would turn the right to keep and bear arms into a privilege for which citizens must prove their worthiness to the government.

The Lee bill also would force Americans to surrender hundreds of millions of commonly owned, factory-standard ammunition magazines capable of holding more than 10 rounds—severely handicapping their ability to defend themselves when outnumbered or outgunned.

Activists such as the Texas congresswoman probably genuinely believe that they’re helping protect Americans. But in reality they would make it harder for most Americans to protect themselves.

According to a 2013 report by the Centers for Disease Control and Prevention, almost every major study on the issue found that Americans use their firearms in self-defense between 500,000 and 3 million times a year. We have good reason to believe that many of these defensive gun uses aren’t reported to police, much less make the local or national news.

The examples below represent only a small portion of the news stories on defensive gun use that we found in January. You may explore more by using The Heritage Foundation’s interactive Defensive Gun Use Database.

If many gun control activists had their way, all of these law-abiding citizens would have first been required to face a plethora of expensive and time-consuming hurdles before being granted the privilege of defending themselves.

In 2021, we must continue to ensure that the right to keep and bear arms remains the right of the people, not the privilege of the chosen elite.