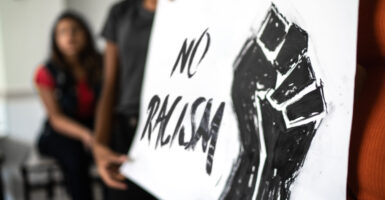 A new book lays out how America's entire system of K-12 education could be transformed to carry out the agenda of the Black Lives Matter movement. (Photo: FG Trade/Getty Images)

Corporations, nonprofit institutions, the media, and countless individual Americans have expressed support of the Black Lives Matter movement, funneling millions of dollars into organizations that purport to carry out its cause.

But although many Americans support the phrase “black lives matter,” the actual aims of organizations and activists committed to this cause often are far more radical than what Americans hear through the lens of the media.

It’s deeply important that we know what the agenda truly is.

“Black Lives Matter at School,” a collection of essays, gives a framework for how the movement aims to shape public education in coming years. The book received a fairly laudatory and sympathetic analysis in The Washington Post.

But much like President Joe Biden’s references to radical critical race theory programs as simply “sensitivity training,” the Post smooths over the radicalism of the work and makes it digestible to a larger audience.

A fair number of left-leaning Americans don’t want to support Marxism and ethnic nationalism, but it’s clear that is what “Black Lives Matter at School” and affiliated groups actually are selling.

The author of one essay in “Black Lives Matter at School” wrote a book in praise of Marxism, and many of the items on the economic and social agenda laid out in the book are quite radically left wing.

When Americans say they support “black lives matter,” do they really want to abolish the nuclear family and boot Abraham Lincoln out of America’s pantheon of heroes?

The New York Times’ 1619 Project already has made its way into classrooms across the country, creating a distorted view of American history. But some activists want to conduct their ideas on a grander scale, placing the ideologies of critical race theory and “anti-racism” at the heart of every student’s education.

It’s important that we know what the agenda truly is. “Black Lives Matter at School” gives a framework for how the movement aims to shape public education in coming years.

The essays in the book were edited by Denisha Jones, a director of teaching at Sarah Lawrence College, and Jesse Hagopian, an ethnic studies teacher at Seattle’s Garfield High School.

Unsurprisingly, the book received an endorsement by Ibram X. Kendi, director of the Center for Antiracist Research at Boston University and author of “How to Be an Antiracist.”

Kendi’s work has received enormous attention over the last year, especially following the death of George Floyd in police custody and the protests and riots that took place over the summer.

As I laid out in my review of Kendi’s book, anti-racism ends up sounding a lot like racism. Racism is redefined by Kendi so that it is no longer an individual act of prejudice directed toward a person or persons based on race, but a collective condition leading to inequities in society.

Hence the left’s new obsession with “equity” instead of inequality.

According to this ideology, unequal outcomes for different racial groups can be explained only by racism; any other explanation at all is, well, racist.

Even colorblindness in how we treat race is racist. The only real way these structural inequalities can be addressed is through reeducation and discrimination.

His biggest policy solution—which he laid out in Politico—is an anti-racist amendment to the Constitution so absurdly anti-republican and tyrannical that it would make Big Brother blush.

One of the essays in “Black Lives Matter at School” decries curriculum in American schools as “Eurocentric and even overtly racist.”

The antidote, the book suggests, is a “week of action” to take place in schools across the country each year in the first week of February.

Each day, students would learn a few of the principles laid out by the Black Lives Matter Global Network Foundation, the movement’s main organization.

These action items include a grab bag of left-wing social and economic ideas, most with a twinge of black nationalism.

The lineup of action for a Tuesday, for instance, makes paeans to “diversity” and “globalism,” yet is curiously narrow in focus, instructing students to see themselves as part of the “global black family.”

Wednesday’s agenda is all about uprooting traditional notions of sex and gender, with the top item reading:

We are self-reflexive and do the work required to dismantle cisgender privilege and uplift Black trans folk, especially Black trans women who continue to be disproportionately impacted by trans-antagonistic violence.

So the official Black Lives Matter website may have removed references to abolishing the nuclear family, but that goal still is included in the agenda for the week of action.

The week of action plan instructs those committed to the agenda to “disrupt the Western-prescribed nuclear family structure requirement by supporting each other as extended families and ‘villages.’”

“Black Lives Matter at School” is of course committed to shaping curriculum. This would in part take place by rewriting America’s past to fit the agenda of the movement.

Among the problematic parts of the way history is taught, according to an article cited in the book, is the “Lincoln-freed-the-slaves myth.” Also, “the failure of the curriculum to account for the centrality of slavery and anti-Black racism in the shaping of U.S. history, North and South.”

It’s not hard to see now why the San Francisco Unified School District recently stripped the name of Lincoln from a local high school because the 16th president was among the “dishonorable” men of our history.

Lincoln, through the lens of this ideology, is just as canceled as any Confederate general.

Much of this reshaping of the American narrative would be conducted by mandated ethnic studies programs.

But what “Black Lives Matter at School” stresses is that the movement’s agenda not be limited simply to history and social studies, nor be talked about only during the week of action:

The principles of Black Lives Matter at School must become part of the broader school culture and permeate all subjects—social studies, English language arts, math, science, music, art, world languages, theater, and beyond—if Black lives are to be truly valued in education.

In 2019, Seattle public schools announced the addition of math to the K-12 ethnic studies programs. This “woke math” had little to do with actual mathematics and instead just found a way to jam ideology into every single aspect of a child’s education.

It’s important to note that the book points to Seattle public schools as the launching point, test bed, and model for the national movement. According to one chapter, the approach has spread to Philadelphia and “more than 40 cities” across the country.

Besides transforming curriculum and young minds, “Black Lives Matter at School” highlights certain policies that are critical for the broader movement’s agenda.

These stem from the “four demands” of Black Lives Matter cited in the book:

Mirroring the “defund the police” activism that went from marginal to mainstream on the left in 2020, “Black Lives Matter at School” aims at both defunding the police in cities and removing police from classrooms if they are present.

Defunding the police serves two goals, according to one chapter of the book. It undermines police departments, described as systematically racist, and it helps divert budget funds to “reimagining justice, education, public safety, and our society.”

This “reimagining” would be carried out by channeling those funds to various programs such as housing, universal child care, and public transit. But the funds also would be used, as a Seattle union recommended, to “hire counselors, social workers, family support workers, student family advocates, restorative justice educators, gender and sexuality educators, ethnic studies educators and curriculum.”

It’s worth noting that the counselors and administrators who would benefit from diverted police funds are conveniently the very people who are the most aggressive and successful in bringing critical race theory to college campuses and high schools.

Defund the police and fund the revolution, apparently.

Another item on the agenda is reimplementing school discipline policies that were nationalized by President Barack Obama’s administration, but ended by Education Secretary Betsy DeVos under President Donald Trump.

The Obama administration threatened schools with civil rights violations if racial discrepancies occurred in the total number of students disciplined in what it called the “school to prison pipeline.”

The Obama policy, according to research by Max Eden at the Manhattan Institute for Policy, unleashed unintended consequences such as drops in academic achievement, higher levels of truancy, and an uptick in more serious crimes committed by students.

And of course, one the book’s authors militantly opposed school choice as a general rule. This despite the fact that many black parents and students have used school choice programs extensively to great benefit across the country.

But this movement, it should be clear, is not at all about the achievement of individual black students.

One chapter of the book rails against the “privatization” of education and the use of school choice to address the problem of failing public schools, which is characterized as a project for the rich:

The alternative to the shock doctrine educational model proposed by the powerful is that of social movements like Black Lives Matter at School and social justice unionism that can fight for a different vision of public school.

That “different vision” of public school is one in which the ideology of Black Lives Matter is wedged into every classroom, subject, and lesson, not just for one week but all year.

It’s not hard to see, given the entire ethos of “Black Lives Matter at School,” that the fundamental issue with school choice is that it means a loss of control over both public resources and, most importantly, the minds of students.

And power over the minds of all young Americans is the point of the whole project.