5 Federal Health Care Actions for States to Expect in 2021 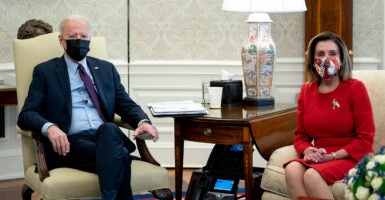 The Biden administration and Congress are poised to take actions that will disrupt the ability of states to respond to their own unique health care challenges. Pictured: President Joe Biden meets with Speaker of the House Nancy Pelosi, D-Calif., to discuss the coronavirus relief legislation on Feb. 5. (Photo: Stefani Reynolds/Pool/Getty Images)

The ongoing response to COVID-19 underscores the importance of a strong partnership between the federal government and states. That partnership should also apply to broader health care reform.

Every state’s circumstances are unique, and federal policy should be flexible enough to allow each state to address the needs of their citizens.

However, the Biden administration and Congress seem positioned to take federal actions that could undermine state flexibility, and leave states shouldering the fallout.

Simultaneously, Congress is in the process of developing another COVID-19 relief package that includes a variety of non-COVID-related health care initiatives, including expanding the size and scope of Obamacare.

There is good reason for states to worry. As governors and state legislatures develop their own health care agendas, looming federal actions create uncertainty and potential disruption for the states. Here are five areas states should be watching as the year unfolds:

In exchange, states are required to maintain certain eligibility requirements (and are likewise prohibited from terminating coverage for people found ineligible from the program).

At the time, even states like New York balked at Congress restricting a state from adjusting its Medicaid program.

Last month, the Biden administration announced that states should expect the public health emergency designation to remain in place until 2022. This extension means additional federal funding will continue to be available to the states, but so will the prohibition on eligibility changes.

This extension is a short-term distraction that ignores the long-term ramifications. While states may be tempted to continue to draw down additional federal dollars, eventually those federal dollars will dry up and the states will be left with a bloated safety net program bigger than when the public health emergency was declared.

Over the past four years, a number of states were granted waivers to modify their Medicaid programs in ways to better reflect the diverse and changing makeup of their programs, in particular the growing number of able-bodied individuals enrolled in the program.

These waivers covered a wide range of targeted, state-specific initiatives, including changes to benefit design, eligibility, and financing of the program.

Yet, in his January executive order, President Joe Biden ordered his administration to review all existing administrative policies to determine which policies should be “suspended, revised, or rescinded.” This broad policy sweep (that explicitly references Medicaid) creates significant uncertainty.

The Biden administration is already poised to take steps to roll back state efforts to allow states to call on enrollees who can work to engage in work or community activities in order to receive benefits.

This and other potential actions by the administration may not only put pending or future state Medicaid waiver proposals in flux but also existing state waivers.

Halting existing state waivers would adversely affect those states that have planned and budgeted their programs based on these waivers and would dampen future state innovation and undermine the flexibility states depend on to tailor and adapt programs to meet their dynamic conditions.

A number of states also received approval to waive certain requirements under the Affordable Care Act to help bring down premiums in their states.

The Trump administration not only eased the waiver process put in place under the Obama administration that states found cumbersome and restrictive, but it also offered states a set of model waivers that included account-based subsidies, state premium assistance, and special needs plans to broaden the scope of tools available to states.

The same January executive order calls for a review of changes to the Affordable Care Act that puts these existing state flexibilities at risk. The administration may decide to retract the guidance that gives states more latitude in meeting the waiver requirements and restrict the scope of waivers moving forward.

It may revisit existing waivers and demand additional requirements or adjustments. The administration may even revisit the waivers more broadly and replace these individual state plans with a one-size-fits-all federal design.

Under any of these scenarios, the result would be less state flexibility, not more.

As more people were priced out of the Obamacare markets, the demand for more affordable health care options increased. Federal policy initiatives, some complemented by state action, were taken to expand and ease the availability of alternative care arrangements.

Federal regulation was promulgated to:

Other innovative care models, such as direct primary care and health sharing ministries, have also emerged as affordable alternatives to traditional health insurance.

Yet, opponents have already taken aim at these new innovative approaches. For example, legal challenges have stalled association health plans, legislative prohibitions against short-term, limited-duration insurance, and sharing ministries have emerged at the state level as well as in Congress.

It remains unclear to what extent the administration and Congress will take action to eliminate or restrict these emerging options, but such federal actions would certainly destabilize state markets, putting families at risk of losing access with little to no recourse.

As momentum for a full-blown, single-payer (so-called “Medicare for All”) plan diminishes in the near-term, the push for a public option (or single-payer on the installment plan) appears to be gaining steam.

While no one plan has consolidated support, a review of legislative text from several leading proposals finds they share many of the same features as a full-blown Medicare for All proposal, and that over time would transfer greater control of the health care system to the federal government.

The impact on the states under any of these public option proposals would be significant. For example, under the public option described in “Medicare for America,” Medicaid would be abolished, but states would be required to continue financing their share of the now-eliminated program to the federal government.

Instead, states would be beholden to federal policy decisions to determine their share. Even seemingly less radical public option proposals would likely require some form of a state contribution requirement to fund the new, federal option.

Early indications from the new administration and Congress suggest that health care will remain a high priority this year.

Beyond the ongoing efforts related to the COVID-19 response, other potential policy actions could impact the states and undermine state flexibility.

Instead of forcing a one-size-fits-all federal solution, policymakers at the federal and state level should join together and support a state-based approach to health care reform. In such an approach, states have the flexibility and federal support they need o adapt and adjust to the health care requirements of their citizens.