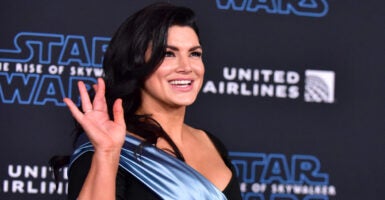 Gina Carano, who stars in “The Mandalorian,” was fired Wednesday by Lucasfilm, which is owned by Disney. Pictured: Carano at the December 2019 premiere of Disney's "Star Wars: The Rise Of Skywalker." (Photo: Rodin Eckenroth/WireImage/Getty Images)

Disney’s Lucasfilm announced it is parting ways with “The Mandalorian” star Gina Carano Wednesday after the actress posted a story on her Instagram comparing the current tense political climate to Nazi Germany.

The story has since expired and is no longer viewable.

Jews were beaten in the streets, not by Nazi soldiers but by their neighbors… even by children. Because history is edited, most people today don’t realize that to get to the point where Nazi soldiers could easily round up thousands of Jews, the government first made their own neighbors hate them simply for being Jews. How is that any different from hating someone for their political views?

In response, Lucasfilm severed ties with the actress, stating: “Gina Carano is not currently employed by Lucasfilm and there are no plans for her to be in the future. Nevertheless, her social media posts denigrating people based on their cultural and religious identities are abhorrent and unacceptable.”

Yet this post did not denigrate anyone based on their “cultural and religious identities.” Far from it. Her statement admonished listeners of the dangers of hating our neighbor based on their race, religion, or politics.

Of course, we should never imply that the political tension of today comes anywhere close to the evils perpetuated by the Nazis. Nothing compares to the depravity of those who plotted and participated in the genocide against the Jewish people. We should never forget this.

Thankfully today, politically driven hate rarely poses a threat to our lives. But it is true that in totalitarian regimes, neighbors indeed inform on others who refuse to embrace the ideology of the state.

Communist tyrants of the 20th century, like Fidel Castro in Cuba, Mao Zedong in China, and Josef Stalin in the Soviet Union, all enlisted support of the general populace as they waged a political war, destroying millions of lives in the process. The threat to our civic society—and sometimes to our very lives—is a threat emanating not only from the state, but also from each other.

Ironically, another Mandalorian star—Pedro Pascal—unmistakenly trivialized the Holocaust while disparaging our own nation. In a tweet, he shared a meme comparing the Trump administration’s immigration policies to Nazi concentration camps.

This is a common practice by the left, which in recent years routinely called former President Donald Trump and his supporters Nazis, or compared Trump’s policies to Nazi crimes.

Pascal later posted a meme on his Instagram comparing Trump supporters to both Confederates and Nazis.

Quick reminder: Disney is the same company that filmed the “Mulan” remake in Xinjiang, China, mere miles away from actual concentration camps. Even worse, it thanked a police bureau in Xinjiang the Trump administration blacklisted for its involvement in the genocidal campaign against Uighur Muslims.

Add the vocal criticism from the movie’s lead actress toward pro-democracy protesters in Hong Kong and Disney’s glaring hypocrisy becomes even more apparent.

Carano will not be the last conservative booted from Hollywood. It seems that the commitment made by Lucasfilm heads to boost women in leadership roles only applied to leftist women.