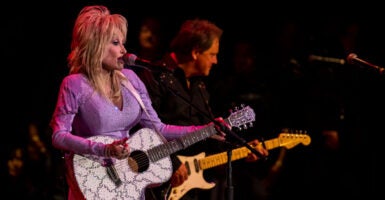 Dolly Parton is the latest target of the left for endorsing a website that helps gig workers promote their services. Pictured: Parton performs during The Gift Of Music Concert at Ryman Auditorium Jan. 30, 2020, in Nashville, Tennessee. (Photo: Brett Carlsen/Getty Images)

Even Dolly Parton can’t escape the wrath of the woke elite. After debuting her first-ever Super Bowl ad, where she flips the lyrics to her iconic song from “9 to 5” to “5 to 9,” the country music legend came under fire for being a capitalist who celebrates hard work and the pursuit of the American dream.

Parton’s ad was produced by Squarespace, a company that promotes itself as a way to build and design your own websites to help “make your 5 to 9 full time.” Because for many people, the “side hustle” that they do in their own time is the job they love the most. They do the 9 to 5 to pay the bills, but as soon as they can earn a living through their side hustle, they leave the 9 to 5 job they don’t like.

“Workin’ 5 to 9, you’ve got passion and a vision,” Parton sings in the Super Bowl remix. “’Cause it’s hustlin’ time, only way to make a livin’. Gonna change your life. Do something that gives it meaning with a website that is worthy of your dreamin’!”

The celebration of working nights to make a living and pursue a career with meaning sounds innocuous enough. But freelance journalist and “organizer” Kim Kelly, writing for NBC News, calls the ad “tone deaf” and “a “rare miscalculation” on Parton’s part.

“Its office workers are portrayed as being overjoyed to continue working after hours, their side hustles are painted as freeing, fun and fulfilling, and the song itself encourages them to ‘be your own boss, climb your own ladder,’” she writes. “It’s a perfect storm of gig economy propaganda.”

While Parton’s ad primarily praises the at-home entrepreneur working nights to start his or her own business, Kelly views it as a celebration of the entire gig economy, which in her view is oppressive.

The gig economy encompasses a wide variety of professions, from freelance writers and musicians to truckers, handymen, ride-share drivers, and grocery deliverers. The sector comprises an estimated 57 million Americans, and represents 35% of the U.S workforce.

The gig economy is particularly liberating and empowering for women who want to prioritize their role as mothers and caregivers, artists who want to pursue their passion projects on the side, and entrepreneurs who want to start something new.

In exchange for traditional benefits such as health care and employment protections, the gig economy offers workers independence and flexibility. They get to decide when, with whom, and how much they work, and can supplement their regular income or earn a livelihood from independent contracting. However, according to labor organizers such as those attacking Parton’s Super Bowl ad, the freedom to work for yourself is wrong.

“The gig economy is a wretched alternative to a stable paycheck and proper benefits, and efforts to paint it as a matter of ‘independence’ or ‘being one’s own boss’ downplay how hard it is for so many gig workers to make ends meet,” Kelly writes for NBC. She adds:

It’s not ‘fun’ or ’empowering’ to juggle multiple jobs; it’s an indictment of a system in which people aren’t paid fairly and workers are squeezed down to the last drop of energy.

Nevermind that a poll commissioned by Lyft found that 71% of gig economy workers don’t want to be employees—or the surveys that indicate those who choose to freelance have more job satisfaction than those who work as traditional employees.

Or that compared to the median family household income in the U.S., gig workers actually earn more each year. Organizers like Kelly believe they know what’s good and “empowering” for workers like you and me, and for that reason, they want to restrict the way Americans are allowed to work.

In California, they already succeeded in this effort. In 2019, lawmakers passed Assembly Bill 5, a law that imposed some of the most significant restrictions on independent workers in American history.

In the 13 months since AB5 took effect, the law has devastated the state’s gig economy. It was so destructive, dozens of politically connected professions successfully lobbied lawmakers for special exemptions, while app-based ride-share and delivery service companies invested $200 million to win their own carve-out.

Meanwhile, little guys such as independent florists and holiday performers were left behind trying to operate under the unworkable law. The Independent Women’s Forum has documented dozens of stories about people losing work.

Despite its backlash in liberal California, leftist lawmakers in Washington, D.C., are poised to pass legislation that would make Parton’s “5 to 9” hustle illegal for many.

Last week, Democrats in Congress reintroduced the Protecting the Right to Organize, or PRO, Act, which would impose a version of California’s AB5 on the entire nation. It includes a provision that would reclassify millions of independent contractors as employees, which would destroy the creative entrepreneurial spirit.

Taking away the ability to pursue your own side hustle is not only an attack on the American workforce, it’s an attack on capitalism itself, which is essentially why Kelly was so disappointed by Parton’s problematic ad in the first place:

And as much as we all love Parton, she’s still a capitalist and still a very, very rich woman; she has a vested interest in boosting her public profile, and Squarespace surely paid dearly for the privilege of borrowing some of her sparkle.

Parton doesn’t need the money herself, but between funding her philanthropic efforts, supporting her family and local community and expanding her empire, I can see her welcoming an influx of filthy lucre. The reality is that it made good business sense, and she’s always been a shrewd businesswoman.

Capitalism has fueled the rise of flexible opportunities that allow men and women to start a business, supplement their family’s income, and balance caregiving responsibilities, medical issues, and other priorities. It’s also what enabled Parton to rise up from a life of poverty to become the queen of country music.

Parton didn’t get there by working 9 to 5 at a music shop with government-mandated benefits. She got there with her own sweat and hustle. A modern-day economy that opens the door for more Americans to pursue their dreams through the pursuit of hard work gives us a reason to celebrate—not shame.

We did something real special working with Squarespace, which as you know, is this new way to get things out there—building your own websites, promoting your own products. This was a wonderful way to bring back that song and add new words and talk about what these new people are doing so I’m excited about it.

Parton’s new take on an old favorite is a poignant reflection of the gig economy: the freedom and flexibility to work when and how you choose, and the ability to create a career for yourself with meaning.

While it’s unfortunate that organizers would work overtime to smear her for the innocent promotion of the entrepreneur spirit, it’s an accurate reflection of the larger attack that’s facing the American dream.