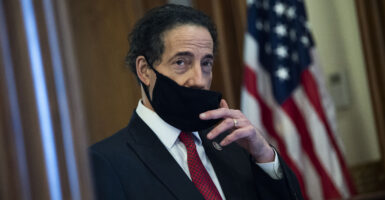 The historic opening day of the first Senate impeachment trial of a former president was fiery and emotional in some moments.

Democrat House managers and lawyers for former President Donald Trump primarily clashed over the constitutionality of trying a private citizen who was impeached seven days before his term as president expired.

The House impeached Trump on Jan. 13 on a single charge of  “incitement to insurrection” for his Jan. 6 speech at a rally near the White House as rioters began to break into the Capitol to try to stop lawmakers’ count of electoral votes for president in a joint session of Congress.

The Senate voted 56-44 to proceed with the trial, rejecting the defense’s argument that it is unconstitutional.

Senate Republicans who joined all Democrats in voting to continue the trial were Bill Cassidy of Louisiana, Susan Collins of Maine, Lisa Murkowski of Alaska, Mitt Romney of Utah, Ben Sasse of Nebraska, and Pat Toomey of Pennsylvania.

All but Cassidy had voted two weeks earlier against a similar measure calling the trial unconstitutional.

Here are six major highlights of the proceedings Tuesday.

The leader of the House impeachment managers, Rep. Jamie Raskin, D-Md., introduced a lengthy video of the events Jan. 6 interspersing Trump’s speech and the joint session of Congress with dramatic footage of rioters breaching and roaming the Capitol.

“The president was impeached by the U.S. House of Representatives on January 13th for doing that,” Raskin said, referring to the violence just shown on large video screens in the Senate chamber. “If that’s not an impeachable offense, then there is no such thing.”

Raskin warned that if the Senate failed to hold the trial, it would create a “January exception” for any president who decided to engage in dangerous conduct in his final days in office.

“It’s an invitation to the president to take his best shot at anything he may want to do on his way out the door—including using violent means to lock that door,” Raskin said.

But Trump lawyer Bruce Castor argued that the Constitution clearly says a former officeholder can be criminally liable. So, he said, the notion of “a January amnesty is nonsense.”

“A high crime is a felony and a misdemeanor is a misdemeanor,” Castor said, referring to the Constitution’s stated reasons a president may be impeached and adding:

The words haven’t changed that much over time. After he’s out of office, you go and arrest him. So there is no opportunity where the president of the United States can run rampant in January at the end of his term and just go away scot-free.

The Department of Justice does know what to do with such people. So far, I haven’t seen any activity in that direction. Not only that, the people who stormed this building, breached it, were not accused of conspiring with the president.

A second Trump lawyer, David Schoen, said that a Senate trial of the former president would subject future former officeholders to being impeached and tried by the Senate.

Schoen asserted that it would be a de facto “bill of attainder,” forbidden by the Constitution, that allows legislatures instead of courts to enact judgments.

“Let’s be perfectly clear: If you vote to proceed with this impeachment trial, future senators will recognize that you bought into a radical, constitutional theory that departs clearly from the language of the Constitution itself.”

Schoen said the House’s article of impeachment “should be treated as a nullity and dismissed based on the total lack of due process in the House.”

“One reason you must send this message here and now is because of the complete lack of due process that brought this article of impeachment before this body,” he told senators. “God forbid we should ever lower our vigilance to the principle of due process.”

Rep. Joe Neguse, D-Colo., one of the nine House impeachment managers, brought up two officials who were impeached by the House after they left office.

In 1876, War Secretary William Belknap resigned to avoid impeachment in a corruption scandal. However, the House opted to impeach Belknap anyway. After intense debate, the Senate held a trial.

“Belknap made the exact same argument that President Trump is making today: that you all lack jurisdiction,” Neguse said in the Senate chamber. “Many senators were outraged by that argument. Outraged.”

In the case of Belknap, the Senate voted 37-29 that it had jurisdiction to try him.

The Senate later acquitted Belknap after only a majority of senators—not the two-thirds required—voted to convict him. Of the 25 senators who voted against conviction, 22 said they believed he was guilty but voted to acquit because of a lack of jurisdiction.

The nation’s first impeachment was of Sen. William Blount in 1797, over charges of conspiring with Great Britain. The problem was that the Senate already had expelled Blount. The upper chamber opted not to try a former official when it was water under the bridge.

However, Neguse’s point seemed to be that Blount didn’t argue that he wasn’t subject to a Senate trial because he was a former official.

Castor focused on the point of the trial, which he said was gaining a guilty verdict to disqualify Trump from running for office in the future.

“We are really here because the majority in the House of Representatives does not want to face Donald Trump as a political rival in the future,” Castor argued.

In continuing his argument that voters should be able to make their own decisions, the lawyer for the former president seemed actually to go against the argument that his client has made since the Nov. 3 election—that his Democratic challenger, Joe Biden, won.

Schoen added that the impeachment trial was an effort “by a group of partisan politicians seeking to eliminate Donald Trump from the American political scene and seeking to disenfranchise 74 million-plus American voters.”

Trump’s lawyers contended that his second impeachment constituted a violation of his First Amendment rights because it had to do with his speech to supporters Jan. 6.

“President Trump was not impeached because he used words that the House decided are forbidden or unpopular,” Cicilline said on the Senate floor. “He was impeached for inciting armed violence against the government of the United States.”

Cicilline added: “We must not, we cannot continue down the path of partisanship and division that has turned the Capitol into an armed fortress.”

6. Trial Will ‘Tear This Country Apart’

The Democrats’ impeachment managers insisted the trial of Trump was important to heal the country.

“We cannot have unity without accountability,” Cicilline said.

However, Schoen said a trial would polarize the country even further.

Schoen referred to the video that the House impeachment managers used to open the trial:

This trial will tear this country apart, perhaps like we’ve only ever seen once before in our history. And to help the nation heal, we now learn that the House managers in their wisdom have hired a movie company and a large law firm to create, manufacture, and splice for you a package designed by experts to chill and horrify you and our fellow Americans.

Schoen added: “Anyone truly interested in real accountability for what happened at the Capitol on January 6 would of course insist on waiting for a full investigation.”

Castor warned Democrats that they may come to regret setting a new precedent.

“The political pendulum will shift one day, and partisan impeachments will become commonplace,” Trump’s lawyer said.

Castor stressed that the attack on the Capitol was “repugnant.”

“You will not hear any member of the team representing former President Trump say anything but in the strongest possible way denounce the violence of the rioters and those that breached the Capitol, the very citadel of our democracy,” he said.