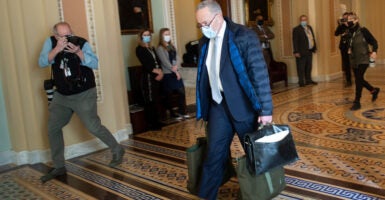 The Senate will try Trump on the House’s single charge of “incitement to insurrection,” blaming Trump’s Jan. 6 speech at a rally for the riot at the Capitol that began as he spoke near the White House.

Though Trump left office Jan. 20, the House impeachment managers are urging the Senate to convict Trump and disqualify him from holding future federal office.

In a 78-page legal brief, Trump’s legal team of David Schoen and Bruce Castor argue that the trial is unconstitutional since he is already out of office.

“The article of impeachment presented by the House is unconstitutional for a variety of reasons, any of which alone would be grounds for immediate dismissal,” the Trump brief says. “Taken together, they demonstrate conclusively that indulging House Democrats’ hunger for this political theater is a danger to our … democracy and the rights that we hold dear.”

The nine House impeachment managers, led by Rep. James Raskin, D-Md., countered in a five-page response that the evidence against Trump is “overwhelming.”

“As charged in the Article of Impeachment, President Trump violated his Oath of Office and betrayed the American people. His incitement of insurrection against the United States government—which disrupted the peaceful transfer of power—is the most grievous constitutional crime ever committed by a President,” the Democrats’ legal brief says.

House Democrats last week filed an 80-page brief laying out their case, and the Trump team issued a short response.

Based on the documents filed Monday, here’s a look at what Trump’s lawyers will argue in the trial and how Democrats plan to counter.

Trump’s speech Jan. 6 at the rally on the Ellipse south of the White House is protected speech under the First Amendment, his lawyers contend, saying: “Notably absent from his speech was any reference to or encouragement of an insurrection, a riot, criminal action, or any acts of physical violence whatsoever.”

Aside from the fact that it does not constitute a crime, let alone a high crime or misdemeanor, President Trump’s speech at the January 6, 2021 event fell well within the norms of political speech that is protected by the First Amendment, and to try him for that would be to do a grave injustice to the freedom of speech in this country.

Trump’s lawyers added that Trump’s reference in the Jan. 6 speech to the need for his supporters to “fight” was a general term often used in politics.

“Of the over 10,000 words spoken, Mr. Trump used the word ‘fight’ a little more than a handful of times and each time in the figurative sense that has long been accepted in public discourse when urging people to stand and use their voices to be heard on matters important to them; it was not and could not be construed to encourage acts of violence,” the Trump brief says.

But Democrats contend that Trump has no First Amendment defense.

When President Trump demanded that the armed, angry crowd at his Save America Rally ‘fight like hell’ or ‘you’re not going to have a country anymore,’ he wasn’t urging them to form political action committees about ‘election security in general.’ …

Also, to be clear, this is not a case about ‘protected speech.’ The House did not impeach President Trump because he expressed an unpopular political opinion. It impeached him because he willfully incited violent insurrection against the government.

Trump’s lawyers continued building an argument that conducting an impeachment trial for a former officeholder is not constitutional.

In a test vote of sorts before the trial began, 45 senators agreed that since Trump no longer held an office from which he could be removed, the trial is not constitutional.

“The Framers’ intent, the text of the Constitution, and prior Congressional practice all confirm that President Trump must stand trial for his constitutional crimes committed in office,” Democrats argue in their brief. “Presidents swear a sacred oath that binds them from their first day in office through their very last.”

“I hold myself, so long as I have the breath of life in my body, amenable to impeachment by [the] House for everything I did during the time I held any public office,” Adams said.

The Trump team notes that although the quote from the nation’s sixth president was a nonbinding statement “about the possibility of late impeachment (in a case that did not even end with an impeachment), there is equal and perhaps even more on the scant record that would weigh against it.”

The former president’s lawyers note that Alexander Hamilton asserted that removal was a required component of the impeachment penalty.

Moreover, James Madison wrote in Federalist No. 39 that a president is impeachable during his continuance in office.

The House impeached Trump for the second time only seven days before his four-year term expired. So, although there is no question about the House’s power to vote to impeach him, the constitutional question surrounds the Senate trial.

“Without that possibility [of removal from office], there cannot be a trial,” Trump’s lawyers assert. “In the civil law analog, this case would be summarily dismissed under Federal Rules of Civil Procedure 12(b)(6) for ‘failure to state a claim upon which relief can be granted.’”

They add that “the Constitution only grants the Senate the additional power to remove a person’s right to run for office as part of the process of removal from office.”

However, the contents also bring up Trump’s lack of action to quell the Capitol riot after it began, which Democrats call a dereliction of duty.

The article of impeachment also faults Trump for what Democrats characterize as his threats to Georgia Secretary of State Brad Raffensperger over certification of the vote for president in Georgia.

“The article is constitutionally flawed in that it charges multiple instances of allegedly impeachable conduct in a single article,” Trump’s lawyers contend. “The Senate should dismiss these charges and acquit the president because this is clearly not what the Framers wanted or what the Constitution allows.”

“The Article of Impeachment charges that President Trump ‘engaged in high crimes and misdemeanors by inciting violence against the government of the United States.’ It then describes a single course of conduct constituting that incitement of insurrection,” Democrats say, adding:

While the article describes the consequences of that conduct—as well as ‘prior efforts to subvert and obstruct the certification of the results of the 2020 Presidential election’—it charges President Trump only with a single impeachable offense.

4. Due Process of Law

The House’s second impeachment of Trump in just over a year’s time was the quickest impeachment in history for a president.

The process of impeaching Clinton and President Andrew Johnson—and the near impeachment of President Richard Nixon—included weeks or months of House hearings.

House Democrats were dismissive of this argument, noting that they invited Trump to defend himself voluntarily and he declined.

“Moreover, the House has invited President Trump to voluntarily testify under oath, yet President Trump immediately rejected that opportunity to tell his story,” the Democrats’ brief says. “The House will establish at trial that this decision to avoid testifying supports a strong adverse inference regarding President Trump’s actions (and inaction) on January 6.”

This article has been corrected to say that John Quincy Adams was the sixth president of the United States.