We Need Civil Rights for All, Not Just a Select Few 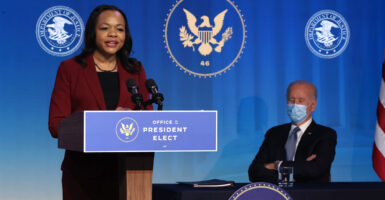 President Joe Biden’s pick to be the new head of the U.S. Justice Department’s Civil Rights Division, Kristen Clarke, has made troubling comments suggesting she does not believe civil rights laws should be enforced on behalf of all Americans. Pictured: Clarke delivers remarks after her nomination Jan. 7. (Photo: Chip Somodevilla/Getty Images)

Caitlin McDonough is a graduate of Grove City College and an intern with the Meese Center at The Heritage Foundation.

They outlawed racial discrimination in all aspects of our society, from education and employment to housing and voting, and have been very successful in achieving that objective with only rare exceptions. And they were written—and intended—to protect all Americans, not just a select few, from being discriminated against based on the color of their skin.

Unfortunately, President Joe Biden’s pick to be the new head of the U.S. Justice Department’s Civil Rights Division, Kristen Clarke, has made troubling comments suggesting she does not believe these laws should be enforced on behalf of all Americans.

Testifying in 2010 before the U.S. Commission on Civil Rights, Christopher Coates, the former head of the Voting Section of the Civil Rights Division, said Clarke met with division officials in 2008 to demand that the Department of Justice dismiss its first-ever case against a black political official for violating the Voting Rights Act—despite the fact that a federal district court in U.S. v. Brown had already found him liable for engaging in flagrant racial discrimination against white voters who were a minority in Noxubee County, Mississippi.

The Voting Rights Act protects all voters and must be enforced in a race-neutral manner. In this case, the Civil Rights Division pursued its case against a political official who was very public about his obnoxious—and illegal—discriminatory conduct, despite Clarke’s opposition.

Or consider Clarke’s handling of another form of discrimination.

For years, colleges and universities, particularly in the Ivy League and other elite institutions, have been discriminating on the basis of race in their college admissions for the benefit of some students and to the detriment of others. This blatant discrimination was virtually ignored by the Civil Rights Division under prior administrations, including the Obama administration.

In October 2020, the Civil Rights Division finally decided to do something about this violation of federal law. It sued Yale University because the school unashamedly discriminates against Asian and white student applicants in favor of black and Hispanic students.

In her capacity as president of the Lawyers’ Committee for Civil Rights Under Law, Clarke expressed her opposition to this lawsuit, saying that “race-conscious admissions” are “indispensable for ensuring institutions are open and available to students from all walks of life, including students of color.” It is ironic for someone to claim that allowing discrimination ensures that institutions are “open and available” to all students.

And it seems that the Justice Department is already following Clarke’s admonition and is going back to ignoring this type of racial discrimination. It has just dismissed its lawsuit against Yale with no explanation.

Clarke is a graduate of Harvard University, where she was the president of the Black Students Association. During her tenure, she made waves even on the left-leaning campus with her radical ideas on race.

In a 1994 letter she co-authored to The Harvard Crimson, Clarke cited a number of “experts” regarding what she called the “truth” about the “genetic differences between blacks and whites.”

The liberal editors of the Crimson found Clarke’s “racist theories” to be “outrageous,” saying that Clarke had “resorted to bigotry, pure and simple.” The Crimson found it “almost inconceivable” that someone like Clarke “would be an elected leader of black students on campus.”

Not long after she penned her letter claiming that blacks are genetically superior to other racial groups, the Black Students Association under her leadership invited professor Tony Martin to campus.

A notorious anti-Semite, Martin’s ensuing lecture about his tract, “The Jewish Onslaught,” was apparently a racist diatribe against the Jewish people, their history, and their traditions, claiming they were the source of the supposedly “ordained” notion of “African inferiority.”

Yet Clarke told The Harvard Crimson that “Professor Martin is an intelligent, well-versed black intellectual who bases his information on indisputable fact.”

Given her past statements, it is not surprising that Clarke rejects the enforcement of federal discrimination laws in a race-neutral manner.

Nor is it a shock to find out that Clarke is also an outspoken opponent of all election reforms, such as voter ID requirements, that are intended to safeguard the security and integrity of elections.

She would likely use her position at the Civil Rights Division to attack any states that try to remedy many of the problems we saw in the last election, such as inaccurate and out-of-date voter registration rolls.

The Civil Rights Division of the U.S. Justice Department needs an assistant attorney general who understands the moral imperative of protecting all Americans from discrimination, no matter what their race or color and no matter the race or color of the person engaging in such offensive discrimination.

And it needs an assistant attorney general who understands that her job is to protect the security and integrity of the voting and election process, not to use federal law to achieve partisan political objectives.

Americans should demand as much.