In Age of ‘Reality Czar,’ Preserving Religious Freedom More Important Than Ever 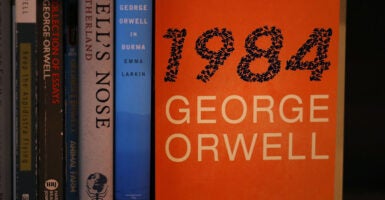 A recent New York Times column suggested, among other things, the appointment of a cross-agency government task force to deal with disinformation headed by a “reality czar.” Apparently, George Orwell’s “1984” is no longer considered a cautionary tale, but for some has become an instruction manual.

Truth be told, a government that even considers the notion of empowering itself to define reality for the citizens it purports to serve is symptomatic of a culture that has denied the ultimate source and even existence of truth.

It wasn’t all that long ago (2018) when Oprah Winfrey, matriarch of post-modern America, exhorted the audience at the Golden Globe Awards, “Speaking your truth is the most powerful tool we all have.”

The implied relativity of truth being yours and/or mine was predictably parroted and fawned over by entertainment and other news media without a hint of consideration of the implications.

What happens when your truth conflicts with mine? This uncomfortable question points to the fact that two opposing views cannot be simultaneously true. If one is true the opposite is false.

Social media has made it possible with a click of the “block” button to never be confronted with ideas or people who don’t subscribe to “your truth.” The danger of this self-imposed intellectual and ideological isolation is only surpassed by the danger of the isolation imposed upon individuals by the arbiters of the technology once hailed as the new public square.

When a nation’s people lack a common understanding that there is such a thing as objective “truth,” we are left to squabble over the utterly subjective individual, “My Truth.” There is only one way to declare a winner under the latter scenario: power. Enter the “reality czar.”

This notion of individualized truth is a source of our elections’, indeed our nation’s, acrimony. The winners get to decide what is true. Hence, for many on the left and the right, partisan politics has taken on the fervor of religious zealotry.

Politics has supplanted true religion, with the government serving as the ultimate decision-maker. This is the very scenario our nation’s Founders sought to avoid.

In drafting our Declaration of Independence, Thomas Jefferson staked our nation’s claim to its own birthright as “self-evident truths” and appealed to the source of all truth, which he referred to as Nature’s God, the Creator, and the Supreme Judge of the world. Without God there could be no truth. When men seek truth, they find God. This pursuit is the heart of all religion.

Unsurprisingly then, when Jefferson’s protégé James Madison drafted our Constitution and Bill of Rights, he firmly ensconced the role of religion in a free society.

He did so with the first two clauses of the First Amendment, ensuring each individual would be free from any one government-mandated religion and remain free to pursue life according to dictates of conscience, guided by his chosen religion or none at all.

This right of conscience is the heart of religious liberty. Indeed, all liberty. This is why those who now seek the installation of a “reality czar” first sought to dismiss the free exercise of religion as nothing more than the “right to worship” in the recesses of our homes and places of worship.

But our Founder’s acknowledgement of an authority higher than government as the source of our rights and of truth is the heart of American exceptionalism.

Mark Twain, in “The Bible According to Mark Twain,” said:

Seeking truth in a society dominated by narratives, opinions, and hyperbolic spin masquerading as fact is more difficult than perhaps any other era in our history. We must seek it anyway.

Speaking truth when it conflicts with cultural orthodoxy can result in being canceled, publicly shamed, labeled heretics, and metaphorically burned at the stake. We must speak it anyway.

Living lives rooted in truth no matter the consequences when the fleeting whims of popular culture or the prevailing winds of public opinion lash against us may deprive us of a life of ease. We must live it anyway.

For patriots, it is a duty. For people of faith, it is calling. For the continued success of our nation, it is a necessity.