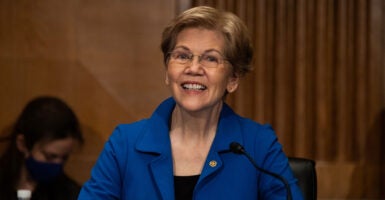 Sen. Elizabeth Warren is likely to reintroduce her 2019 Stop Wall Street Looting Act. The bill is based on a backwards understanding of the private equity industry. (Photo: Graeme Jennings-Pool/Getty Images)

Politico reports that progressive Democrats are set to “crack down” on the private equity industry, with Sen. Elizabeth Warren, D-Mass., likely to reintroduce her 2019 Stop Wall Street Looting Act.

Warren has said: “For far too long, Washington has looked the other way while private equity firms take over companies, load them with debt, strip them of their wealth, and walk away scot-free—leaving workers, consumers, and whole communities to pick up the pieces.”

This backward view of the private equity industry—and the American free enterprise system itself—is dangerous. It threatens millions who depend on jobs made possible by capital from private equity, and it is especially harmful at a time when people are struggling to get back on their feet.

Interestingly, Warren’s view appears to be at odds with moderate Democratic senators who recognize that private equity firms help funnel trillions of dollars in much-needed capital to private business across the U.S. If those moderates fail to check Warren’s approach, the progressives’ antagonistic view of free enterprise is likely to wreak havoc on both Wall Street and Main Street.

Rhetoric aside, Warren’s bill will be much more harmful for middle-class workers and retirees than millionaires.

What Is the Private Equity Industry?

The popular television show “The Profit” features Marcus Lemonis, a successful businessman and investor who finds struggling businesses that need help. Lemonis provides the owners with capital—some combination of cash, debt, and equity—in the hope of helping them turn the business around to make both them and himself a future profit.

The private equity industry essentially consists of people like Lemonis who form companies by pooling their resources (or the resources of many investors) to make long-term investments in (mostly) private companies. Typically, they invest in failing companies and those that they feel could be more profitable with better managers and more capital.

Data shows that in the decade ending in 2019, the amount of funds invested by private equity firms grew by $4 trillion. Since 2013, funds from these firms have invested over $400 billion per year in thousands of American companies. The types of companies they invest in are as diverse as Popeyes, Uber, Dunkin Donuts, and Dollar General.

While progressive critics are fond of pointing to the ultimate failure of Toys R Us as an example of how private equity firms “bleed” companies “dry for a profit,” the truth is that Toys R Us, just like many other struggling firms, would likely have shut its doors much sooner without the help of private equity.

It simply is not true that these firms invest for a quick profit. They typically invest for a three- to seven-year window, and the managers do not see any profits until after the fund earns a minimum rate of return (hurdle rate), usually 8%.

As with most progressive economic legislation, the 2019 Stop Wall Street Looting Act will increase federal control over private individuals’ economic decisions. (The new version of the bill is expected to be very similar to the 2019 version.)

Many of the provisions are brazenly hostile to the American free enterprise system.

For instance, Sections 101 and 102 of the act would hold certain private equity fund owners, managers, and investors personally liable for all debt incurred by a firm that they invest in (including legal judgements). These provisions effectively erase the notion of a corporation acting as a separate legal entity, and force the private equity funds (and the investors) to guarantee their investments.

It is difficult to imagine how these provisions would not dramatically decrease private equity investments, thus starving thousands of companies of much-needed capital.

Section 201 of the act prohibits target companies from making certain capital distributions for two years after a buyout, likely lowering the overall return investors can expect to receive. As with the previous two sections, this provision is likely to result in fewer companies receiving funds from private equity firms.

Other sections of the act impose a 100% surtax on certain fees that fund managers charge, and limit the amount of interest that certain businesses owned by private equity funds can deduct on their taxes. These kinds of punitive measures have no place in federal law.

As if all of this was not enough, the act also raises taxes on investments by eliminating the so-called carried interest loophole, a favorite progressive cause for more than a decade. Rather than close a loophole, this provision would punitively increase taxes “on investment managers, real estate developers, and other investment partnerships.”

Why This Is Bad for Main Street

Private equity firms are a key part of the American economy. They invest in Main Street companies, they take risks, and they help business owners survive and provide jobs.

When the companies they invest in do well, they earn a profit. Private equity is as American as it gets.

Punishing the industry through higher taxes and special legal provisions will hurt all Americans, especially the people that own and work in the companies that private equity firms help.