Lawyers Are Facing Reprisal for Representing Trump. This Is Un-American. 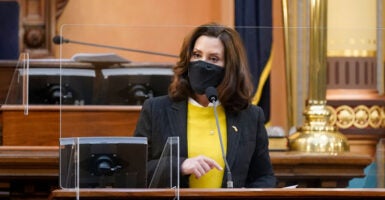 “So … you represented Trump?” That question is unfairly haunting a number of the former president’s lawyers.

Because of his legal counsel to former President Donald Trump, constitutional scholar and law professor John Eastman—the former dean of the law school no less—was pushed out of Chapman University, where he spent his entire, very distinguished academic career.

The same thing happened to Cleta Mitchell, a well-known and highly respected Washington, D.C. lawyer who had practiced with Foley and Lardner for decades.

Now, Michigan lawyers Greg Rohl, Scott Hagerstrom, and Stefanie Junttila, who represented the Trump campaign in election litigation in the state, are being unfairly and unjustly targeted for disbarment by Gov. Gretchen Whitmer and state Attorney General Dana Nessel.

These lawyers find themselves in the all-too-familiar position today of being punished for carrying out their professional duties to the best of their abilities—as required by the codes of conduct that govern all attorneys—by representing a client who is politically unpopular with those in power.

This is not just wrong, but un-American—something we don’t say lightly. This country is fundamentally based on the rule of law, which depends on protecting the ability and independence of lawyers to take unpopular clients and unpopular cases, something that has been done by brave, principled lawyers throughout our nation’s history.

This is one of those lessons that people on both sides of the political aisle selectively defend and selectively forget.

Unfortunately, we’ve been here before.

Some progressives deride prosecutors for enforcing laws they view as unjust, and some conservatives deride defense attorneys for defending dangerous or unsavory individuals charged with committing heinous crimes. And just about everyone derides divorce lawyers.

But we are, as John Adams said, a nation of laws and not of men. That means that we insulate our justice system from the fickle whims of human nature with processes and procedures. These are designed to minimize human error and to diminish the influence of the court of public opinion.

The independence of lawyers is one of the most important parts of that system. Adams himself put his famous line into practice when, in 1770, he defended British soldiers accused of killing American colonists during the Boston Massacre. A more unpopular representation could hardly have been imagined, but Adams risked his reputation and career because he believed in the rule of law.

The right to counsel is one of the most precious rights we have because it is essential to an individual’s ability to assert any other right. As distinguished law professor Geoffrey Hazard Jr. once said, the adversarial system “stands with freedom of speech and the right of assembly as a pillar of our constitutional system.”

That is exactly what the governor and attorney general of Michigan are trying to do by calling for the disbarment of several of Trump’s lawyers, who did exactly what rule 1.3 of the Michigan Rules of Professional Conduct directs them to do, which is practice “zeal in advocacy upon the client’s behalf.”

They claim that the lawyers should be disbarred because they “undermine[d] the faith of the public in the legitimacy of the recent presidential election, and lent credence to untruths that led to violence and unrest.”

But a commitment to the rule of law separates a lawyer from the implications of the cases he undertakes. If not, then Clinton “protected a child rapist,” and Guantanamo defense lawyers “undermined our national security and tried to free terrorists.”

Nonsense. In each of these cases, the lawyers upheld the rule of law by playing their proper role in the process. The same goes for Trump’s lawyers. They made legal claims under applicable laws that were reviewed by the courts, which is just as it should be.

That is not only an absurd claim but a dangerous one. Under that bizarre theory, all of the lawyers who represented Al Gore in 2000 in his election contest should have been disbarred.

So too the lawyers who represented Democratic congressional candidate Dan McCready in North Carolina in 2018 in an election contest that the state’s Board of Election overturned due to absentee ballot fraud.

And Democrat lawyer Marc Elias should also be disbarred for claiming that voting machines produced incorrect results that favored Republican Claudia Tenney in the race for New York’s 22nd District.

When lawyers violate their ethical obligations by, for example, filing a meritless lawsuit, the courts already have rules and procedures to deal with them. The justice system is designed to do that. But taking on an unsavory client or a client that state officials don’t like for partisan reasons does not amount to litigating in an unethical manner.

When people intentionally blur that line, as Whitmer is doing, they undermine the rule of law, the fair administration of justice, and access to the protections of our legal system.

Elections are decided at the ballot box and, in some cases, issues arising from an election and potential recounts may require legal resolution. Punishing the lawyers who represent candidates and their campaigns in these cases is not only wrong, it is disgraceful.

No matter which candidates you supported in the last election, no matter which political party you believe represents your points of view on how this country should be governed, everyone should agree that the retribution, reprisals, and payback being imposed on lawyers involved in the 2020 election have no place in our civil society.