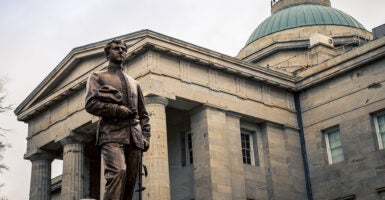 "That you would portray a black man, just because he’s in the GOP, as a Klansman…the hypocrisy is mind-numbing," North Carolina Lt. Gov. Mark Robinson says. Pictured: the state Capitol in Raleigh, North Carolina. (Photo: rustyl3599/Getty Images)

Republican North Carolina Lt. Gov. Mark Robinson denounced a cartoon that depicted Republicans on the State Board of Education as members of the Ku Klux Klan during a press conference on Tuesday.

Robinson, the state’s first African American lieutenant governor, criticized a local news affiliate that circulated the cartoon and expressed his outrage over the cartoon being released during Black History Month, according to a report from The Hill.

“On the second day of Black History Month, the first black lieutenant governor of North Carolina has been portrayed as [racist]. That you would portray a black man, just because he’s in the GOP, as a Klansman … the hypocrisy is mind-numbing, folks,” said Robinson in his press conference, as reported by The Hill.

The cartoon was published after multiple Republicans on the State Board of Education pushed back against Democrats’ demand that course material on systemic racism be taught in public schools.

Robinson also criticized the teacher that submitted the cartoon to the opinion column of WRAL.com and questioned why anyone with similar views should be allowed to teach children.

“The person who drew this is an eighth grade social studies teacher, … If he’s promoting this at WRAL, what is he doing in his classroom?” stated Robinson during his press conference.

“The person who drew this is an 8th grade social studies teacher,… If he’s promoting this at WRAL, what is he doing in his classroom?”

“If I ran a statewide publication like WRAL, I would not post something like that. It’s all about where you stand at the moment when you speak,” Robinson said.

“Editorial cartoons are creative and provocative, using hyperbole and satire,” said Capitol Broadcasting Opinion Editor Seth Effron in a statement to The Hill.

Bradley Stein is a contributor to The Daily Caller News Foundation.