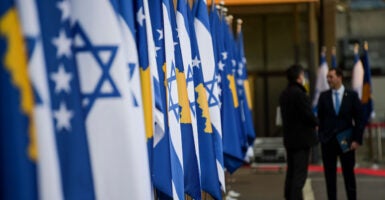 On Monday, Kosovo and Israel established diplomatic ties. Pictured: Kosovo's government officials stand in front of Kosovo's and Israel's flags displayed during a ceremony at the headquarters of the Foreign Ministry in Pristina on Feb. 1. (Photo: Armend Nimani/AFP/Getty Images)

Signing the groundbreaking agreement, Israel’s Foreign Minister Gabi Ashkenazi highlighted the “warm and friendly relationship” between Israel and Kosovo, a Muslim-majority country in the Balkans.

With the diplomatic tie formally knotted, Kosovo will become the first Muslim-majority country to have its embassy in Israel located in Jerusalem. In return, Israel has become the 117th country to formally recognize the independence of Kosovo.

Despite the fact that Israel and Kosovo had not established diplomatic ties until 2021, the two nations have historically maintained good relations, with the Israeli government providing substantial humanitarian aid to Kosovo during and after its 1998-99 war with Slobodan Milosevic’s regime.

Israel, a small nation in one of the world’s toughest neighborhoods, has been renowned as “the Start-Up Nation,” punching above its weight for a country with a population of less than 9 million people through innovation and entrepreneurship.

The capable Israeli economy has charted an upward trajectory of economic freedom over the past 26 years, reaching its highest level ever in the latest edition of The Heritage Foundation’s annual Index of Economic Freedom.

Kosovo is a small, young democracy in the western Balkans with a history of complex relations between its ethnic and religious groups. Currently, the U.S. maintains 660 troops in Kosovo as the largest contingent in NATO’s Kosovo Force, a peacekeeping operation designed to maintain stability in the country.

From Washington’s foreign policy perspective, continuing to encourage Kosovo to be a more secure and prosperous nation is clearly in America’s interest. Despite challenges, as noted by the International Monetary Fund, “Kosovo has been a successful example of a post-conflict country able to develop its economy by implementing important reforms.”

Hailing the establishment of Israel-Kosovo diplomatic ties, the State Department said, “When our partners are united, the United States is stronger. Deeper international ties help further peace and stability in the Balkans and Middle East.”

The historic establishment of diplomatic ties was an integral feature of the recently signed Serbia and Kosovo economic agreement, negotiated by America’s then-special envoy to the region, Richard Grenell.

Grenell made it clear: “The U.S. will spend the next year implementing these new agreements, and the people and governments of Kosovo and Serbia have the full trust of the U.S. government to carry them forward.”

The Jerusalem Post welcomed the establishment of full diplomatic relations between the two nations in the context of the recent spate of agreements between Israel and its Middle East neighbors that were mediated in large part by the Trump administration over the past year:

Kosovo had refused to recognize the Jewish state, while Israel refused to recognize Kosovo’s independence. [Former President Donald] Trump changed that … It is our fervent hope that the normalization of relations between Israel and Muslim states mediated by the Trump administration will continue under the Biden administration … [That] is the way to secure the best future for all people. It is in everyone’s interest.

We certainly agree with that.

More than ever, the advancement of economic freedom, opportunity, and prosperity is a worthy foreign policy goal for America’s strategic engagements in the world.