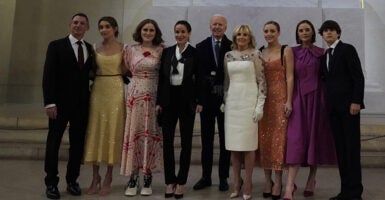 After President Joe Biden’s inauguration, he ordered everyone on federal lands to wear a mask. That night, he and his family posed for pictures at the Lincoln Memorial—none of them wearing a mask.

California Gov. Gavin Newsom told Californians it’s “essential” to avoid “mixing with people outside of your household.” Then he had dinner with lots of people outside his household, without masks.

You can see the mask-less governor and the Biden family in my new video.

Newsom did apologize for attending “a friend’s birthday party.” Maybe you heard about that. But you might not know that the restaurant charges $800 for dinners or that the governor’s “friend” is a lobbyist, a politically connected “fixer” who helps select Hollywood businesses get exemptions from government shutdowns.

Restaurant owner Angela Marsden, instead of hiring an expensive lobbyist, spent her money building an outdoor patio that complied with COVID-19 regulations. But then the state shut down even outdoor dining.

“I’m losing everything,” she cried in a viral video.

But the business right next door wasn’t shut down. NBC’s TV show “Good Girls” was allowed to set up a dining area right outside her restaurant.

“She doesn’t have a powerful team of lobbyists to argue on her behalf in the state’s capital,” points out Jarrett Stepman, a reporter who covers politicians’ hypocrisy for The Daily Signal.

California gives him plenty of fodder. San Francisco Mayor London Breed went to a party at that fancy restaurant, too.

Speaker of the House Nancy Pelosi got her hair done when California salons were closed.

When a reporter asked, “How is that not in conflict with the order?” Reeves responded that his parties “send a message to the people of Mississippi that you can return to a life that is somewhat normal.”

But “the people” can’t. Only politicians get to do that.

Even after a photo showed her at the event, Biden nominated Raimondo to be secretary of commerce.

“Instead of being booted out, they get a promotion,” complains Stepman.

Washington, D.C., Mayor Muriel Bowser ordered a 14-day quarantine for anyone going to several states, including Delaware, for “nonessential” activity. Then she went to Delaware for a Biden victory celebration, something that strikes me as “nonessential” as they get.

“I do a lot of things to advance the interests of the District of Columbia,” was Bowser’s arrogant defense. “All of them are necessary.”

If politicians do it, it’s always necessary. Rules are for the little people.

In Chicago, after politicians ordered salons closed, Mayor Lori Lightfoot still went to one for a haircut.

She defended her decision, saying: “I’m out in the public eye. I take my personal hygiene very seriously.”

Stepman says Lightfoot is a “double hypocrite” because “she was seen attending Election Day parties and giant street festivals not wearing a mask.”

The Heritage Foundation tracks such political hypocrisy, calling it “COVID Hypocrisy.” As I write, they’re up to 57 examples of “Rules for thee, but not for me.”

Stepman concludes, “It’s up to us to say, ‘You’re either going to follow these rules, change these rules, or we’re going to throw you out.'”

Throwing out these hypocrites would be a good start.