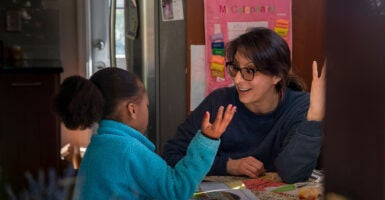 The Republican Study Committee plans to introduce six school choice measures in the House on Thursday in response to the ongoing coronavirus pandemic, which has shuttered schools across the country.

“These [committee] members recognize that if Congress had placed a greater emphasis on school choice, parents and students could’ve been freer to avoid the debacle of virtual learning last fall,” Rep. Jim Banks, R-Ind., said in a statement provided to The Daily Signal.

“I hope Congress can learn from that mistake and promote school choice policies in the future,” said Banks, the chairman of the Republican Study Committee, the largest caucus of conservatives in the House.

The bills to be announced Thursday by the committee are intended to bolster school choice, which its members call “a core issue for conservatives, because we believe each student deserves to learn in an educational environment best tailored to their needs.”

One of the bills, from Rep. Ted Budd, R-N.C., called the A-PLUS Act, provides local communities and states “additional flexibility to determine how to improve academic achievement and implement education reforms.”

A resolution from Rep. John Moolenaar, R-Mich., “expresses support for the designation of the week of January 24 through January 30, 2021, as ‘National School Choice Week.'”

A bill from Rep. Joe Wilson, R-S.C., called the Military Child Educational Freedom Act, aims to strengthen school choice among military families by opening  “Coverdell Education Savings Accounts for active-duty military families who wish to use the funds for homeschooling, regardless of the state in which they reside.”

Coverdell Education Savings Accounts are education savings accounts set up in the United States solely for paying qualified education expenses for the designated beneficiary of the account, according to the IRS.

Banks himself is introducing a school choice bill, as well as a resolution calling on schools finally to be reopened.

Banks’ Education Savings Accounts for Military Families Act would “instruct the [secretary of education] to establish an education savings account … on behalf of a military family (if the family chooses) to pay for applicable education expenses.”

Banks’ resolution calls on schools to “reopen safely and immediately for in-person instruction so our nation’s students can continue to learn and thrive.”

The committee says Roy’s bill would be formally reintroduced “at a later date,” but is being highlighted this week in connection with School Choice Week. It would permit federal dollars for K-12 education to “follow the eligible child, regardless of whether the child is in public school, private school, or homeschool.”

“Even before the pandemic, millions of American students were trapped in failing schools. Over the last year, millions more have been prevented from attending school altogether,” Anderson said. “The RSC’s bold school choice proposals would allow families of all income levels to choose the best education for their children and put our nation’s schools back on track.”