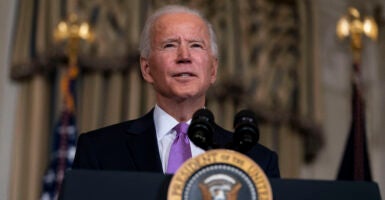 “We need to make the issue of racial equity not just an issue for any one department of government," President Joe Biden says Tuesday before signing executive actions in the State Dining Room of the White House. (Photo: Doug Mills/Getty Images)

Denouncing what he called “systemic racism that has plagued our nation for far, far too long,” President Joe Biden signed executive actions Tuesday aimed at “racial equity,” including a measure to end the use of private prisons to hold federal inmates.

“We are in a battle for the soul of this nation and the simple truth is, our soul will be troubled as long as systemic racism is allowed to persist,” Biden said before signing the executive orders, adding:

We can’t eliminate it. It’s not going to be overnight. We can’t eliminate everything. But it’s corrosive. It’s destructive and it’s costly. It costs every American, not just [those] who felt the sting of racial injustice.

We are not just less of a—we are not just a nation of morally deprived because of systemic racism. We are also less prosperous. We’re less successful. We’re less secure. We must change, and I know it’s going to take time. But I know we can do it and I firmly believe the nation is ready to change. But government has to change as well.

The Obama administration, in which he served as vice president, sought to pull contracts from private prisons, Biden said. Former President Donald Trump reversed that course.

“The executive order directs the attorney general to decline to renew contracts with privately operated criminal facilities,” Biden said, adding: “This is the first step to stop corporations from profiting off the incarceration that is less humane and less safe, as studies show.”

Biden said “the blinders have been taken off” Americans since the May 25 death of George Floyd in Minneapolis after an arresting police officer pressed his knee on Floyd’s neck for about eight minutes.

Still, Biden didn’t seem to adopt the view of some on the left that America intentionally was founded on white supremacy, as he referred to principles in the Declaration of Independence.

“We have never fully lived up to the founding principles of this nation, to state the obvious, that all people are created equal and have the right to be treated equally throughout their lives,” Biden said. “It’s time to act now not only because it’s the right thing to do, but because if we do, we will all be better off for it.”

Nevertheless, during the remarks, he referred to his predecessor’s 1776 Commission, a panel that focuses on the country’s founding, as “offensive and counterfactual.” Biden disbanded the commission.

Biden put Susan Rice, chairwoman of his Domestic Policy Council, in charge of the racial equity measure and coordination among federal agencies. Rice was national security adviser and U.N. ambassador during the Obama administration.

Biden also signed a presidential memorandum ordering the Department of Housing and Urban Development to review Trump administration policies that may have undermined fair housing laws.

“Home ownership is an essential tool to wealth creation and to be passed down to generations,” Biden said. “Today, I’m directing the Department of Housing and Urban Development to address this historical racism in federal housing policies.”

“I’m directing the federal agencies to reinvigorate the consultation process with Indian tribes; respect for tribal sovereignty will be a cornerstone for our engaging with Native American communities,” Biden said.

The president issued an executive memorandum for the Department of Health and Human Services to make battling “xenophobia” part of the federal government’s COVID-19 response.

This is unacceptable and it’s un-American. I’ve asked the Department of Justice to strengthen its partnership with the Asian American, Pacific Islander community to prevent those hate crimes. I’ve also asked the Department of Health and Human Services to put out best practices for combating xenophobia in our national response to COVID.