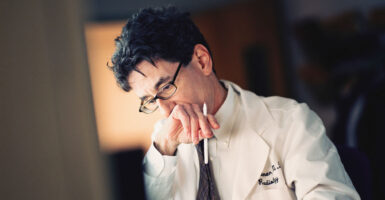 No one should be required by law to disregard their conscience or their professional medical judgment. (Photo: Reza Estakhrian/Getty Images)

Amid a flurry of activity and controversy with the incoming Biden administration, there was still a major victory for religious freedom and conscience protection last week.

On Jan. 19, a federal court, citing the Religious Freedom Restoration Act, upheld conscience protections for physicians and struck down the transgender mandate that ordered doctors to perform transgender interventions when doing so violated the provider’s sincerely held religious beliefs.

The case, Sisters of Mercy v. Azar, is hardly well-known, but no less newsworthy. The plaintiffs are an order of Catholic nuns, a Catholic university, and Catholic health care organizations. They sued the government, challenging Section 1557 of the Affordable Care Act, which forced doctors to perform transgender interventions against their sincerely held religious beliefs or even sound, medical advice.

The U.S. District Court for the District of North Dakota ruled that: “Absent an injunction, [the religious plaintiffs] will either be ‘forced to violate their sincerely held religious beliefs’ by performing and covering gender-transition procedures ‘or to incur severe monetary penalties for refusing to comply.’”

The legal organization Becket represented the plaintiffs and successfully argued, according to its press release, “that sensitive medical decisions should be kept between patients and their doctors without government interference, and that no one should be required by law to disregard their conscience or their professional medical judgment.”

In a statement, Luke Goodrich, senior counsel at Becket, underscored the importance of religious freedom within the medical community: “The court’s decision recognizes our medical heroes’ right to practice medicine in line with their conscience and without politically motivated interference from government bureaucrats.”

While this ruling should be applauded, this lawsuit should not have been necessary in the first place. Under the Religious Freedom Restoration Act and the First Amendment, religious providers should not have to give care in a way that violates their beliefs, but lawsuits suggesting otherwise challenged that concept.

In 2017, for example, Evan Minton sued Dignity Health, which operates dozens of Catholic hospitals. These include the one that refused to perform a hysterectomy sought by Minton after learning that Minton scheduled the treatment as a transgender intervention, not for health purposes. Minton is a biological female who now lives as a transgender male.

“I was denied health care because I am transgender. The justification, according to the hospital, was that religious doctrine permits them to refuse transgender patients, just because of who we are,” Minton says on the American Civil Liberties Union’s website.

Minton, the ACLU, and other similar organizations often argue that conservatives perpetuate LGBTQ discrimination under the guise of religious liberty.

Minton’s case, and the Sisters of Mercy v. Azar decision, demonstrate this is not exactly the case. In fact, it’s often the opposite.

The plaintiffs in the case are “devoted to works of mercy and purposely work at religious-based hospitals whose missions are to help the underserved,” according to the court’s ruling. Yet they are told that despite beliefs that motivate them to serve others, they must also provide care that violates those very mores.

This issue—discrimination on the basis of sexual orientation and gender identity—will be one of the most controversial and important issues with which the Biden administration and conservatives will tangle. It is now present in every major sphere of public life: from schools and bathrooms to sports and hospitals.

While the Trump administration issued the “refusal of care” rule through the Department of Health and Human Services to aid religious people in abiding by their conscience, the Biden administration has already started to unravel such measures.

Given this federal court’s ruling in Sisters of Mercy, it’s clear the new administration and the judiciary will be addressing discrimination and religious liberty.

For now, doctors in at least one district court jurisdiction can continue to lawfully practice medicine while maintaining their beliefs.