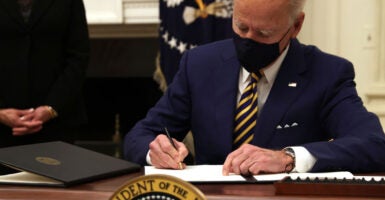 President Joe Biden signed two executive orders Friday in the State Dining Room of the White House. One would raise the minimum wage for federal contractors to $15 per hour. (Photo: Alex Wong/Getty Images)

President Joe Biden’s policies, announced in the first days of his administration, potentially could kill millions of jobs, according to estimates from both government and private studies.

Since taking office Jan. 20, Biden has announced a slew of policies, including executive actions to immediately take effect and legislative proposals.

By his third day in office, Biden took three major actions that “will devastate our economy at a time when we’re already on the brink of recession,” said Alfredo Ortiz, president of the Job Creators Network, a small-business advocacy group.

Ortiz was referring to Biden’s canceling of the Keystone XL pipeline, rejoining the Paris climate accord, and an executive order requiring a $15 an hour minimum wage for federal contractors.

“America’s job creators can lead America’s recovery, but we can’t afford the Biden administration’s left-wing agenda,” Ortiz told The Daily Signal in a statement. “The American people want pro-growth policies and a return to prosperity, not socialism and a deep, long-lasting recession.”

Here’s a look at the impact four of Biden’s policies could have on jobs and the economy.

In October, TC Energy announced that in 2021, the Keystone XL pipeline would mean 11,000 American jobs.

But, on his first day in office, Biden signed an executive order to block further construction of the pipeline.

The $8 billion pipeline was set to transport hundreds of thousands of barrels of crude oil per day from western Canada to the U.S. Midwest and Gulf Coast. President Barack Obama blocked the project in 2015, but in 2017, President Donald Trump approved it. However, it has been delayed after environmental groups sued.

For Biden, the decision was a clash between two major constituencies, organized labor and the environmental lobby.

“The six contractors will be directly responsible for hiring more than 7,000 union workers in 2021, with special emphasis placed on hiring locally first and giving priority to qualified local and Indigenous-owned businesses,” the Keystone XL press release from October said. “When combined with additional 2021 contracts to be announced later, the total number of American union workers constructing Keystone XL in 2021 will exceed 8,000 and $900 million in gross wages. In total, Keystone XL is expected to employ more than 11,000 Americans in 2021, creating more than $1.6 billion in gross wages.”

In August, the United Association of Union Plumbers and Pipefitters endorsed Biden in the 2020 presidential race. However, just days before Biden’s inauguration, the union expressed disappointment.

“In revoking this permit, the Biden administration has chosen to listen to the voices of fringe activists instead of union members and the American consumer on Day 1,” union President Mark McManus said in a statement. He added:

Let me be very clear: When built with union labor by the men and women of the United Association, pipelines like Keystone XL remain the safest and most efficient modes of energy transportation in the world.

Sadly, the Biden Administration has now put thousands of union workers out of work. For the average American family, it means energy costs will go up and communities will no longer see the local investments that come with pipeline construction.

A Keystone XL spokesman could not be reached Friday after a phone inquiry for this report.

“The message of the president and the White House would be that he is committed. His record will show, shows the American people that he’s committed to clean-energy jobs—to jobs that are not only good, high-paying jobs, union jobs, but ones that are also good for our environment,” Psaki said of Biden. “He thinks it’s possible to do both.”

Biden supports legislation to increase the federal minimum wage from $7.25 per hour to $15 per hour. Biden can—and intends to—take executive action during his first 100 days to require federal contractors to pay $15 per hour and also bring more federal employees up to that rate.

“President Biden is today directing his administration to start the work that would allow him to issue an Executive Order within the first 100 days that requires federal contractors to pay a $15 minimum wage and provide emergency paid leave to workers,” a White House statement on Friday said.

The statement adds, “The Executive Order directs the Office of Personnel Management to develop recommendations to pay more federal employees at least $15 per hour.”

It would require an act of Congress for such an increase to affect all employers and employees across the country.

One problem is that wages vary across the country, said Rachel Greszler, a research fellow in economics, the budget, and entitlements at The Heritage Foundation.

“Fifteen dollars per hour is not the same in D.C. as in other parts of the country,” Greszler told The Daily Signal.

For instance, Greszler said, $15 per hour is median income in Mississippi now, though the median income is much higher in Washington, D.C., or New York.

More than doubling the minimum wage would mark an unprecedented increase in the federally mandated wage floor, she said.

A July 2019 Congressional Budget Office analysis estimated millions of job losses if the federal minimum wage were hiked to $15 per hour over a five-year period. That estimate came at a time when the U.S. economy was much stronger.

“According to CBO’s median estimate, under the $15 option, 1.3 million workers who would otherwise be employed would be jobless in an average week in 2025. (That would equal a 0.8 percent reduction in the number of employed workers),” the CBO’s 2019 estimate said. “CBO estimates that there is about a two-thirds chance that the change in employment would lie between about zero and a reduction of 3.7 million workers.”

The CBO analysis went onto say a $15 wage would, “Boost workers’ earnings through higher wages, though some of those higher earnings would be offset by higher rates of joblessness.”

The CBO also says it would:

“On the basis of those effects and CBO’s estimate of the median effect on employment, the $15 option would reduce total real (inflation-adjusted) family income in 2025 by $9 billion, or 0.1 percent,” the CBO says.

“The biggest trade-off and negative effect would not be job loss, but non-wage pay decrease,” Young told The Daily Signal. “Employers would cut tuition payments, benefits, and it would mean more work for the employees if positions aren’t filled.”

Young added that the economic impact could be harsh, but noted that the average for state minimum-wage laws nationally is “in the neighborhood” of $12 per hour. So, the proposed increase itself for many states would not be more than double.

3. Paris Climate Accord and 3.1 Million Jobs

On his first day in office, Biden rejoined the Paris climate accord that Obama entered into in 2015. In 2017, Trump withdrew from the pact, which includes 174 countries.

According to a report from The Heritage Foundation, the energy regulations accepted by the Obama administration as part of the accord could kill 400,000 American jobs by 2035.

“Based on regulations and emissions-reduction targets set by the Obama administration, Heritage economists estimate that by 2035 there will be: an annual average loss of nearly 400,000 jobs, a total income loss of more than $20,000 for a family of four, and an aggregate [gross domestic product]  loss of over $2.5 trillion—all for a few tenths of a degree Celsius in abated warming,” the April 2016 Heritage report said.

A May 2017 report estimated the terms of the climate agreement could cause 440,000 jobs lost by 2025 and 3.1 million by 2040. The study done by the National Economic Research Associates Economic Consulting was funded by the U.S. Chamber of Commerce and the American Council for Capital Formation.

“A restriction in carbon emissions means that the total cost of fossil fuel increases, leading to higher costs of production. This cost increase leads to the closing of facilities that cannot compete on a cost basis. The increasing stringency of the [greenhouse gas] policy leads to more closure of manufacturing sectors over time, leading to fewer manufacturing jobs,” the report says.

A large share of this job loss occurs in the construction sector, which employs a significant portion of the overall industrial labor force. Total economy-wide employment losses amount to about 2.7 million jobs in 2025.

A similar law in California left many freelancers unemployed. It’s difficult to pinpoint how many jobs would be lost if this law were passed at a federal level.

The Freelancers Union estimates that 1 in 3 workers in the United States participates in independent work. Furthermore, about 10% of workers perform independent work, such as contracting, freelancing, and consulting as their primary job. Fewer than 1 in 10 independent contractors would prefer a traditional work arrangement, according to the Bureau of Labor Statistics.

“It would not just kill jobs, but it would force people into a certain type of job,” Greszler said.

Single parents and disabled people who benefit from flexible jobs would likely be harmed the most, she said. She added the federal proposal is more strict than the California law.

Biden backed the federal legislation as a candidate.

“Biden strongly supports the Protecting the Right to Organize Act’s (PRO Act) provisions instituting financial penalties on companies that interfere with workers’ organizing efforts, including firing or otherwise retaliating against workers,” the Biden campaign website said. “Biden will go beyond the PRO Act by enacting legislation to impose even stiffer penalties on corporations and to hold company executives personally liable when they interfere with organizing efforts, including criminally liable when their interference is intentional.”

Specifically, the federal legislation would broaden the definition of “employee” under the National Labor Relations Act. The new definition would be that an individual performing any service shall be considered—with some exceptions—an employee and not an independent contractor.