We Must Ensure Fair Play for Female Athletes 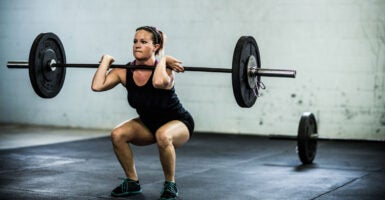 As President Joe Biden takes office and begins implementation of controversial measures like the Equality Act, it’s clear one of the most important cultural arenas of 2021 will be ensuring fair play for female athletes at all levels of sports.

USA Powerlifting banned Cooper from competing in the Minnesota State Bench Press Championships in Jan. 2019 due to Cooper’s claim of being transgender. Fox 9 reports, “The policy is an outlier among international, national, and local sports organizations, many of which have recently adopted more inclusive policies when it comes to trans athletes, according to the lawsuit.”

When women compete against biological males, the inherent physiological advantages men possess put them at an unfair disadvantage.

Interestingly, Fox 9 reported, “Erin Maye-Quade, a former Minnesota lawmaker and current advocacy director for Gender Justice, said ‘[USA Powerlifting’s] policy banning trans athletes from competing is creating problems where there are none.’” This is unequivocally false.

A group of talented, female athletes in Connecticut have faced the opposite problem: losing to transgender athletes due to a policy that allows them to compete with females. As the girls continued to lose key competitions, their only resort was to file a lawsuit and demand that the policy be reversed.

In fact, one of the hallmark machinations of leftist organizations—particularly those that claim to be trans activists—is to push for reform, or as they say, “transgender inclusion,” while simultaneously claiming that doing so is no problem at all and in fact, not upending any societal norms whatsoever. This kind of gaslighting is commonplace but reprehensible.

It’s important to realize that allowing—let alone mandating—transgender athletes to compete with females at high school and collegiate levels is unprecedented, unfair, and a purposeful attempt to upend centuries-old norms.

Some people are holding firm, even fighting back. USA Powerlifting is a great example, having instituted a policy that bans transgender athletes. I hope it can stand resolved in the face of this lawsuit.

Idaho has already passed a law ensuring fair play in women’s sports, although lawmakers there have come under fire for it and a judge has blocked it from taking effect, citing a transgender athlete’s lawsuit that alleges the law is discriminatory.

At least two other states are actively trying to pass laws that protect female athletes, New Hampshire and North Dakota.

If, culturally, the U.S. accepts that transgender athletes can and should compete against female athletes, thereby actively or passively accepting that there are no biological differences between females and males, sex and gender distinctions will finally be completely erased, and the slope toward a myriad of other adverse outcomes will be all the slipperier.

Gender parity exists in the U.S. due to the hard work of multiple fronts, not the least of which is the modern-day feminist movement, lawmakers on both sides, women like the late Supreme Court Justice Ruth Bader Ginsburg, and even men like former President Donald Trump, who hired a record number of women to work in his administration.

Lawsuits like the one against USA Powerlifting undo the very gender parity women say they have always wanted. While this attack on gender parity is limited to just sports, it likely won’t remain limited to sports.

If women—and men—cared about gender parity like they say they do, and as women deserve as human beings, preventing transgender athletes from competing against biological women should be a no-brainer, and a bipartisan issue everyone should support.

As a mother, I wouldn’t want my daughters to compete against biological males and lose, despite their best efforts. The damage this will do to kids, not to mention the long-term damage to our society culturally, will reverberate for decades to come.

Have an opinion about this article? To sound off, please email le[email protected] and we will consider publishing your remarks in our regular “We Hear You” feature.