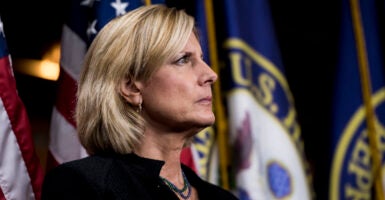 Then-Rep. Claudia Tenney, R-N.Y., answers reporters' questions on Sept. 6, 2018. She was narrowly defeated for reelection later that year, but is leading in her 2020 rematch, which is still undecided. (Photo: Bill Clark/CQ Roll Call/Getty Images)

The only remaining congressional race still not certified will have to wait until at least Jan. 27—and even after that, legal appeals will likely ensue.

But late Wednesday, a state judge ordered the Oneida County Board of Elections to review more than 1,000 provisional ballots. Of those, about 300 are likely to be counted, Tenney said.

Some 311,695 votes were cast and counted so far. Tenney said Thursday that her campaign expected to “maintain our lead” even with the new count.

“It certainly underscores that there is a problem with elections and the fact that we are not able to come up with a certified winner. We are closing in on February of the following year—and in about a month, we start circulating petitions for [the 2022] primary season in New York,” Tenney told The Daily Signal.

The November contest was a rematch from 2018, when Brindisi won a close race over then-freshman incumbent Tenney in a strong year for Democrats. Brindisi’s first term expired, so the seat is vacant until the election is certified.

As for when the race finally wraps up, said Tenney: “Who knows?”

“There is an appeals process. I’m certain that will probably happen. It’s unfortunate that people in New York’s 22nd District, they do not have a voice in Washington or a representative right now,” she said.

Brindisi’s campaign did not respond to email and phone inquiries for this report.

Earlier this month, Brindisi announced he would be running again for the seat in 2022, regardless of this year’s outcome.

“I am hopeful that I will be certified the winner in this race for New York’s 22nd District,” Brindisi said in a statement after filing with the Federal Election Commission. “And I will get right back to fighting for bipartisan solutions, making Congress work for working families, and standing up to anyone on behalf of this district.

“Serving this community is the honor of a lifetime. I look forward to being reelected and stand ready to continue to serve this community for years to come,” he added.

Most of the problems arose from major legal changes in mail-in voting as well as from the federal “motor voter” law, Tenney said. Also, the state of New York has a more expansive version of that law.

“My case showed that we are continuing to allow votes to be counted for people who technically weren’t registered under New York law or didn’t get their ballots there, weren’t in on time,” Tenney said. “So, here we are looking at ballots from people whose registrations weren’t processed back in November, and we are going to go back and count those votes.”

Federal law says you have the right to cast a vote. But the question is, you don’t necessarily have the right to have that vote count. If you are not an eligible voter, that vote shouldn’t count. There is no process, it seems, in New York where, if a vote is cast and canvassed, if it’s not legal, how do you take it back?

In August, partly in response to a troubled process in the June primaries, New York Gov. Andrew Cuomo signed executive orders to expand absentee balloting. Cuomo also signed laws he called “sweeping” that would make it easier to vote.

Cuomo and state lawmakers did little to address some of the Empire State’s worst problems, said Hans von Spakovsky, manager of the Election Law Reform Initiative at The Heritage Foundation.

“This is a symptom of the fact that New York has one of the worst-run election systems in the country,” von Spakovsky, a former Federal Election Commission commissioner and member of the Presidential Advisory Commission on Election Integrity, told The Daily Signal. “They lack the basic security protocols, such as voter ID, and no interest in comparing voter registration lists to other states to find out who has moved out. This election just epitomizes all of those problems.”

Local election officials complained they lacked the resources to comply with the new rules. Tenney said she didn’t excuse mistakes by Oneida election officials, but framed their new burdens in the context of a business.

“If you take our optimum week and output, and say you’ve got to do five or 10 times that in the midst of a pandemic with the same people doing the same number of hours with the same equipment and the same facility, we are not going to make the goal,” Tenney said. “And even if we get close to the goal, there are going to be a lot of mistakes made. This is a lot of what happened.”

However, many did not meet the legal deadline. So, the judge ordered the county election staff to determine how many of the 1,000 provisional ballots should be counted.

The judge didn’t give either campaign what it was looking for.

Tenney’s campaign legal team argued the court could not retroactively register the voters. Conversely, Brindisi’s lawyers argued the court should count only 69 additional votes they determined belonged to Democrats, but not more than that, according to the Syracuse Post-Standard.

“Both candidates press this Court to disregard either some, or all, of the potentially valid ballots because it is strategically advantageous for them in this election,” the judge wrote, adding, “Both of these arguments ignore the fact that this problem only exists because … the Oneida County Board of Elections failed to comply with [election law] and review its records.”

He gave the county a Jan. 27 deadline to report the results of the review.

Tenney thinks that could be favorable to her campaign.

“We think there is somewhere between 290 [and] 300 of those. Those votes, the judge is going to have recounted next week,” she said, noting the judge rejected the Democrats’ push for a selective count. “There are 140 or so Republicans in that group, along with conservatives. We feel like, in the worst-case scenario, we’re not going to lose any votes. We’ll maintain our lead.”