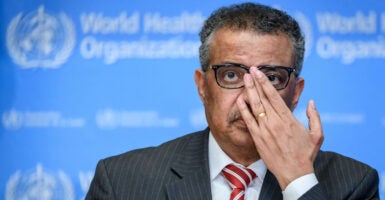 President Joe Biden's reversal of the Trump administration's withdrawal from the World Health Organization without demanding reforms may have pleased WHO Director-General Tedros Adhanom Ghebreyesus (pictured), but was a hasty and ill-advised decision. (Photo: Fabrice CoffriniAFP/Getty Images)

Last year, President Donald Trump decided to halt United States funding to the World Health Organization and withdraw from the organization based on its inept response to COVID-19 and its obsequious failure to confront China over its lack of transparency and cooperation during the outbreak.

President Joe Biden, in one of his first actions, reversed those decisions in a letter to the United Nations secretary-general.

Biden’s action is hasty and short-sighted, seemingly driven more by the need to reverse Trump than to advance U.S. interests in the WHO.

Trump was correct in his criticism of the WHO. Had China been more transparent and cooperative, many lives could have been saved and economic damage avoided in the U.S. and around the world.

Likewise, the former president was correct in that the World Health Organization was too willing to take Chinese assurances at face value and too slow to respond to the initial COVID-19 outbreak.

This does not mean that Trump’s decision was without fault. Trump made his announcement before giving his representatives an opportunity to determine what needed to be fixed at the WHO or rally support among other member states to pursue those changes.

Trump complicated matters by not abiding by his own timeline. Trump made his final decision before the original 60 days he said would be needed to conduct the thorough investigation. Moving of the goal posts undermined the efforts of his team to secure the very reforms he sought and shifted attention from the missteps of China and the WHO.

Biden’s decision to return to the WHO is intended to signal America’s renewed commitment to the multilateral system and willingness to cooperate in the global response to the COVID-19 pandemic.

But this feel-good gesture, while the polar opposite of Trump, is rash.

Biden opposed Trump’s decision to withdrawal, but he should have seen it as a useful means to leverage reform of the WHO.

But Biden put no conditions on restoring U.S. membership and funding. In fact, the letter to the secretary-general does not mention the failings of the WHO in the COVID-19 response nor outline any reforms that his administration will try to secure.

The implicit message is that Biden is happy with the status quo. Unsurprisingly, WHO Director-General Tedros Adhanom Ghebreyesus is overjoyed about the U.S.’ decision to rejoin, but gave no acknowledgement of the need for reform.

This should outrage every American, especially the friends and family of the 400,000-plus that have died as a result of COVID-19.

While China deserves primary blame, the WHO also bears responsibility for failing to alert the international community about Beijing’s lack of transparency and cooperation. Without changes, the WHO will fail the world once again.

Leadership starts at the top, and the damage is done. Subsequent calls to reform the WHO by other administration officials will not bear the same weight.

Biden should have made clear that the U.S. expects better of the WHO and secured commitments from other governments on reforms prior to announcing his decision to renew funding and rejoin the WHO.

With the decision to reengage made, look for the WHO—and member states like China that oppose reform—to pocket U.S. “partnership” and money, and slow walk reform.

The world deserves a WHO that is accountable and effective. By failing to tie U.S. membership and funding to reform, Biden squandered key leverage and made this outcome less likely.