In Abortion Limbo, Foes of Even Modest Curbs Show How Low a Society Can Go 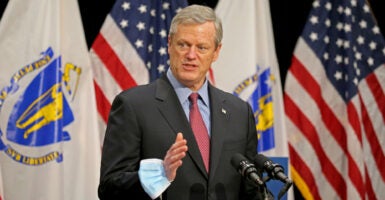 Massachusetts Gov. Charlie Baker, seen here on Dec. 22 in Boston, vetoed a bill that expanded the availability of later-term abortions and permitted minors age 16 and 17 to get an abortion without the consent of a parent or guardian. It was too extreme even for the pro-choice Republican governor, but his veto was overridden. (Photo: Stuart Cahill/MediaNews Group/Boston Herald/Getty Images)

How low can a nation sink?

The history of the past century offers any number of examples.

Radical governments of the right and left have engaged in mass killings of their citizens. Acts of terrorism have taken the lives of innocent men, women, and children—even while they were dancing at weddings, sitting in cafes, visiting a hotel, or enjoying a nightclub.

Such acts are a heinous injustice, and so, too, is the most prosperous country on Earth declaring as a matter of law that the lives of its infant boys and girls are utterly worthless.

That was the news—again—out of Massachusetts over the Christmas break as the Bay State adopted a law that erased the lives of children up to, and likely through, the time of birth.

Massachusetts—founded as a haven of freedom by settlers who committed themselves to “just and equal laws” in the Mayflower Compact—passed a bill that nullifies justice and equality, ignoring all precedents of that great state.

So noxious was the measure that the state’s Republican governor, Charlie Baker, who supports the 1973 Supreme Court abortion ruling in Roe v. Wade, felt compelled to veto it.

In his letter on Christmas Eve, he wrote the Legislature: “I cannot support the sections of this proposal that expand the availability of later-term abortions and permit minors age 16 and 17 to get an abortion without the consent of a parent or guardian.”

Even Baker’s last-minute offer to support alternate language allowing abortion to full term when there is risk to the mother’s mental health was rebuffed.

Essentially, abortion law in Massachusetts now is such that the tiny being in the womb is a legal nullity. That accomplishment is cloaked by its advocates with the euphemisms of “reproductive freedom” and “abortion access.”

If absolute liberty to take life at such a stage is “access” to health care, how is it also not “reproductive freedom” for parents of a newborn to have “access” to a cliff from which to cast their young?

Of course, our nation hasn’t reached this nadir without a long approach. This week, the 48th anniversary of Roe v. Wade will arrive with its toll of more than 62 million lives lost and millions more damaged or destroyed.

The enormity of it all no longer strikes an anguished chord among many Americans. Abortion has seeped its blood-stained reality into every corner of American life.

Over the past 20 months, members of Congress, mostly Republicans, have attempted to awaken the conscience of a nation by marking a limit on when we will accept the killing of the near-born.

These members introduced in Congress the Born-Alive Abortion Survivors Protection Act. Opponents contend they oppose the measure because it isn’t necessary. That’s evident legal and medical nonsense, however. Massachusetts’ draconian new law, joining those of New York, Vermont, and other states, clearly proves that.

So do new data from Texas. The Lone Star State revamped its abortion reporting law in 2013 to require the collection of statistics on infants born alive after abortion. Keep in mind that abortionists, wary of what has been called that “dreaded complication,” take steps to end the baby’s life in the womb so that it cannot be born alive, regardless of his or her health or stage of development.

The new numbers from Texas indicate that 10 infants were born alive after abortion in 2018 and 2019. Texas officials, thankfully, say they are investigating.

There’s even more reason to think tragedies like this are happening in states where, unlike Texas, no legal limits exist on abortion. These horrors are not what our nation is about.

The trampling of the little guy—a boy or girl on the threshold of birth, living, breathing, able to curl a fist, suck his or her thumb, wrinkle a nose, sneeze—is not who the Democratic Party once was.

The Republican Party, said to be home to society’s elite, no longer turns its back on these vulnerable children.

Some 205 members of the House—13 short of the number needed—have signed a discharge petition to force bringing the bill to the House floor.

It’s time that Congress take the next step and tell every baby, rich or poor, black or white, native-born or immigrant, that he or she will not be left on the cold steel of an abortion clinic table. It’s time to join hands across the aisle and make this protection national law.