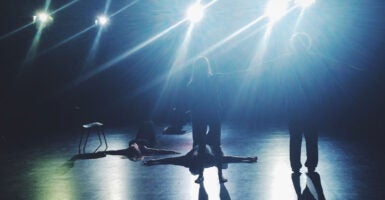 The fifth annual Conservative Theatre Festival will give conservative playwrights a platform to have their voices heard at the Abbey Theater in Dublin, Ohio, on Jan. 29 and Jan. 30. (Photo: Ole Spata/EyeEm/Getty Images)

Succeeding in the world of theater is tough no matter who you are. But if you’re a conservative Orthodox Jew, it’s even tougher. Just ask Joshua Danese.

Danese is hardly new to the profession. Some three decades ago, he found success as a young, progressive, secular Jewish writer. He wrote and produced plays and occasionally acted as well. Then one day, he was inspired to write a play about Orthodox Jews.

“I started doing research about them, one thing led to another, and in that journey I ended up being religious,” he told me in an interview.

Josh changed his name to Yehoshua Danese, and became a rabbi in a yeshiva. He got married, and he and his wife have 11 children. Now, 30 years later, he has gotten back to writing, but as a very different man. And his current identity has made his reception in the theater world very different from what it had been when he was young and liberal.

“I understand that things are stacked against me,” he says, “and that no one will put on a play that is politically incorrect.”

But he perseveres, and now his play, “When Ms. Thompson and Cynthia Met at the Beach,” will be performed for the first time at the fifth annual Conservative Theatre Festival, which will take place at the Abbey Theater in Dublin, Ohio, on Jan. 29 and Jan. 30. This may be the nation’s only conservative theater festival.

Playwright Linda Howard Cooke harbored similar concerns about her play “Unplanned.” She was sure it would never see the light of a theater because of its pro-life theme.

Cooke started writing plays 10 years ago, when she was working in a small rural high school in Nebraska as a drama coach. “I had a hard time finding many plays that I liked,” she told me, “so it was the old adage: if you want it done properly, do it yourself.”

She has since had four plays published, and “Unplanned” will be performed for the first time at the Conservative Theatre Festival at the end of this month.

Robert Cooperman, the founder of Stage Right Theatrics, explains that he started the annual Conservative Theatre Festival because he was tired of seeing conservatives presented as bumpkins and people who needed to be educated. Now in its fifth year, the festival describes its content as “original plays from marginalized voices.”

The irony is hard to miss. The arts have long been a place for marginal voices. But today, theater, film, television, and literature are almost entirely in lockstep with the woke left—and marginal voices have been marginalized into silence. Moreover, the arts are increasingly used as a cudgel to beat up those who do not adhere to the prevailing worldview of the left.

The pressure for theaters to host woke content—or else feel the backlash of cancel culture—is extreme. Last year, theater producer Marie Cisco published a list of “Theaters Not Speaking Out” She asked people to list theaters that had not made a statement “against injustices toward black people.”

The fact that theaters across the country were struggling merely to stay alive amid canceled seasons was of no concern.

It is all the more admirable, therefore, that Cooperman is not afraid to stand as a lone voice in organizing the fifth annual Conservative Theatre Festival. And in spite of the fact that the coronavirus will restrict the audience size, the good news is that for the first time, the performances will be livestreamed, making them accessible to audiences across the country.

The plays that will be performed in this year’s festival are: “For a Daddy” by Anne Nygren Doherty; “Friday Night Dead Teiresias” by Mark Dinsmore; “Grandma’s Easter Parade” by Jason Ford; “If the Shoe Fits” by Hope Bolinger; “Unplanned” by Linda Howard Cooke; and “When Mrs. Thompson and Cynthia Met at the Beach,” by Joshua Danese.

As we enter this next, difficult phase of the battle for the soul of the country, conservatives must re-engage in the culture. We cannot allow it to be the exclusive domain of the left.

As Andrew Klavan pointed out in his article “The Crisis in the Arts: Why the Left Owns the Culture and How Conservatives Can Begin to Take It Back”: “The arts … are one of humanity’s most noble enterprises. They have been hijacked by adherents of a low and oppressive ideology. We should take them back.”