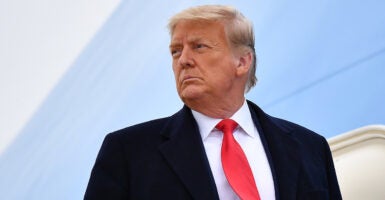 “After review, and in light of concerns about the ongoing potential for violence, we removed new content uploaded to Donald J. Trump’s channel for violating our policies,” YouTube said in a statement.

The company added that Trump’s channel was given its first “strike” and wouldn’t be allowed to upload any videos for at least seven days. In addition, all comments on Trump’s channel would be disabled due to “safety concerns.”

2/ Given the ongoing concerns about violence, we will also be indefinitely disabling comments on President Trump’s channel, as we’ve done to other channels where there are safety concerns found in the comments section. https://t.co/1aBENHGU5z

On Friday, Twitter became the first to permanently suspend Trump from using his account, citing potential “incitement of violence.” Twitter’s ban, as well as the other bans and suspensions, came after the “Save America” rally Jan. 6 where Trump spoke before some of the attendees stormed the Capitol building.

The mob of supporters breached the Capitol after Trump’s speech, in which he claimed the November election was rigged and stolen.