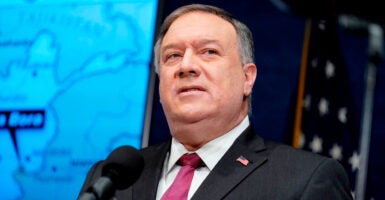 Secretary of State Mike Pompeo blasted Iran in a speech on Tuesday for the covert support and sanctuary it has extended to al-Qaeda. Pompeo charged that Iran had become the “new Afghanistan,” the country where al-Qaeda was based in 2001 when it launched the 9/11 terrorist attacks.

He warned that “unlike in Afghanistan, when al-Qaeda was hiding in the mountains, al-Qaeda today is operating under the hard shell of the Iranian regime’s protection.”

Today, I revealed new information about how the Islamic Republic of Iran has given a new operational headquarters to al-Qa’ida, the terrorist network with more American blood on its hands than any other. For al-Qa’ida, Iran is the new home base. Tehran gives sanctuary to the terror group’s senior leaders as they plan attacks against America and our allies.

Indeed, since 2015, Tehran has allowed al-Qa’ida figures in the country to freely communicate with other al-Qa’ida members and perform many functions that were previously directed from Afghanistan and Pakistan, including authorization for attacks, propaganda, and fundraising.

Pompeo told reporters at the National Press Club in Washington that he was announcing publicly for the first time that al-Qaeda’s No. 2 leader, Abu Mohammad al-Masri, died on Aug. 7, 2020, in Iran. His statement confirmed reports, first published in The New York Times on Nov. 13, 2020, that al-Masri was killed in an Israeli covert operation in Tehran, Iran’s capital.

The al-Qaeda leader, wanted by the U.S. government for the 1998 bombings of two U.S. embassies in Africa and other terrorist crimes, had been living in Iran along with an unknown number of other al-Qaeda terrorists since 2003.

Initially, the terrorists were restricted by some form of house arrest, but Iran gradually lifted restrictions and allowed them to plot terrorist attacks. Al-Qaeda’s military leader, Saif Adel, and other key leaders reportedly remain active in Iran.

Pompeo broke new ground by stating that “Iran decided to allow al-Qaeda to establish a new operational headquarters, on the condition that al-Qaeda operatives abide by the regime’s rules governing al-Qaeda’s stay inside the country.”

He charged that “the Iranian Ministry of Intelligence and Security and the [Islamic Revolutionary Guard Corps] have provided safe havens and logistical support—things like travel documents, ID cards, passports—that enable al-Qaeda activity.”

Pompeo also cited a letter from al-Qaeda leader Osama bin Laden to one of his subordinates that was found by Navy SEALs during the 2010 Abbottabad raid, in which they killed the terrorist leader. Bin Laden wrote that “Iran is our main artery for funds, personnel, and communication … There is no need to fight with Iran unless you are forced to.”

Pompeo announced the imposition of sanctions on two Iran-based al-Qaeda leaders and three leaders of the al-Qaeda Kurdish battalions, which operate along the Iran-Iraq border.

He also announced a reward of up to $7 million under the State Department’s Rewards for Justice program for information leading to the location or identification of Iran-based al-Qaeda leader Muhammad Abbatay—also known as Abd al-Rahman al-Maghrebi.

Pompeo noted that all U.N. members have a responsibility to apply sanctions on Iran for supporting al-Qaeda under the terms of U.N. Security Council Resolution 1267, and urged other countries to fulfill this obligation.

Going Out With a Bang

Pompeo has been extremely busy in recent days. On Sunday, he declassified a State Department report that accused Iran of violating the Chemical Weapons Convention.

The report noted that Tehran had supplied illegal chemical weapons to the Libyan regime of Muammar Qadhafi (overthrown and killed in 2011), during Qadhafi’s 1978-1987 war against Chad.

It also accused Iran of failure to declare its complete holdings of riot control agents and failure to submit a complete declaration of chemical weapons production facilities.

Pompeo also notified Congress on Sunday that the State Department would soon designate Ansarallah, the Houthi Islamist extremist organization in Yemen, as a foreign terrorist organization.

As the Trump administration winds down, Pompeo is going out with a bang, launching new salvos of sanctions at Iran and its proxies.

Pompeo’s bottom line on Iran, articulated in his National Press Club speech, would be good advice for the Biden administration: “Let’s not lie to the American people and pretend appeasement can work.”

Iran Acting Tough—Biden Team Is Being Sent This Message

Why Was Iran Hiding Al Qaeda’s No. 2 in Tehran?

The Beirut Bombing: 30th Anniversary of an Iranian Terrorist Plot