Environmental Extremism Is Creeping Into Every Domain of Public Policy 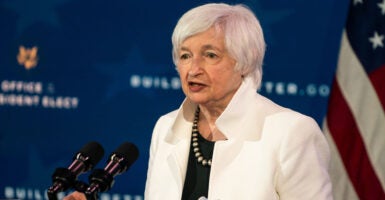 Many on the left continue to place their ideology of environmental extremism above all other considerations, including economic growth, individual freedom, and the welfare of low-income Americans.

This worldview ignores critical trade-offs and places environmental interests above even basic principles that have long served as a foundation of this nation. Further, this extreme environmental movement has crept into almost every issue area imaginable.

There are certainly environmental issues that need attention, but sensible environmental policy doesn’t address those issues in a vacuum without regard for other important concerns. Yet, this extreme movement acts in such a manner.

To environmental extremists, it’s more important for the government to force radical changes to how we generate electricity and fuel our vehicles than it is to have reliable and affordable energy or to remove barriers to innovation.

It doesn’t matter how unrealistic their objectives are, or the fact that their climate change efforts would have no meaningful effect on global temperatures.

This virtue-signaling may make the extremists feel better about themselves, but it certainly won’t make low-income households feel better when they are disproportionately impacted by higher energy prices. Nor will it make Americans feel better to pay more of their hard-earned money for less reliable energy.

Some extremists would prioritize their environmental agenda over efficiently producing safe and affordable food for Americans.

Instead of simply addressing specific environmental issues, some want to develop a national food policy, which is just another way of saying a federally centralized approach to dictate food and agricultural production, distribution, and consumption.

One of the primary goals of this envisioned national food and agricultural policy would be advancing environmental objectives. What is ignored in this movement is affordable food and consumer choice.

To see how such a philosophy would be applied in practice, the 2015 Dietary Guidelines process is instructive.

In developing its recommendations for the Department of Agriculture and the Department of Health and Human Services, the influential Dietary Guidelines Advisory Committee decided it would take into account non-dietary issues, such as climate change and sustainability, and not focus solely on the nutritional health of Americans—which is the purpose of the guidelines. Fortunately, the agencies rejected this extremism.

Housing, Land Use, and Transportation

The extreme environmental agenda has long been entrenched in urban policy, primarily through “smart growth,” which is a pleasant name given to an unpleasant centralized planning philosophy.

Some of the key components of this philosophy are restricting development through land use regulations, which drives up housing prices, and limiting the use of cars by promoting higher density development and transit. The ability of Americans to afford their own homes and live where they would like is ignored.

This is yet another effort to create a government mandate for environmental, social, and governance risks to play a primary role in banking and investing.

These efforts are a backdoor way to try and accomplish environmental objectives and simultaneously to try and radically change the very purpose of American businesses, and as a result, the entire economy.

The Left Does Not Have a Monopoly on Environmentalism

Environmental policy should be debated in an open and transparent fashion. Using every issue imaginable as a pretext to push an environmental agenda is both not transparent and minimizes other critical concerns, from higher prices of basic needs to ensuring a stable food supply.

The left likes to claim a monopoly about caring for the environment. But nobody, either on the left or right, has such a monopoly.

Placing the environment over individual rights and freedom, and even humanity itself, as some extremists do, may make some feel better about their commitment to the environment, but they do so at the expense of the well-being of the American people.