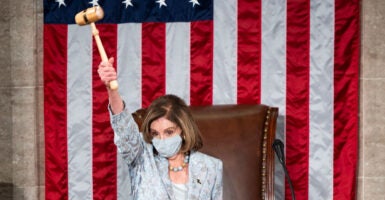 The House of Representatives will vote on a rules package for the 117th Congress that give us an insight into how Speaker Nancy Pelosi, D-Calif., intends to govern the House. Pictured: Pelosi holds the speaker's gavel in the air on the House floor after becoming speaker of the 117th Congress on Jan. 3. (Photo: Bill Clark/Pool/AFP/Getty Images)

The House of Representatives was expected to vote Monday afternoon on a rules package that will govern their processes for the 117th Congress. This package represents an ultimate power grab by House Speaker Nancy Pelosi, who was reelected to the post by a razor-thin vote of 216-209.

The rules give us an insight as to how the California Democrat intends to govern the House. It appears that the far left will be the tail that wags the dog by eviscerating minority rights.

Perhaps the most important proposed rule is the fundamental weakening of the motion to recommit, one of the only tools that are provided to a minority party. The motion to recommit allows members of Congress to prevent or amend a bill before it is voted upon on the House floor.

The tool was used successfully previously by Republicans in Congress. For example, over two dozen Democrats voted for a Republican motion to recommit on a gun control bill. The motion added immigration language requiring gun sellers to notify Immigration and Customs Enforcement when illegal aliens attempt to purchase guns.

Pelosi’s caucus flirted with the idea of eliminating or altering the motion to recommit then, something that House Minority Leader Kevin McCarthy called the “nuclear option” for the House. Rep. Jim McGovern, D-Mass., chairman of the House Rules Committee, said at the time: “Having not too long ago been in the minority, I want to make sure whatever we’re talking about, that there’s some protection of minority rights.”

Well, obviously the incoming majority could not stand the heat, so all that has been thrown out the window with the proposed new rules package.

The new rules take the teeth out the motion to recommit by making it a simple “motion to delay consideration,” by sending the bill back to the committee of jurisdiction and eliminating any time for debate.

The new House has demonstrated that it will not tolerate any diverse opinions, and has no interest in protecting minority rights in affecting legislation.

Apart from destroying the motion to recommit, the proposed rules aim to rid the House of what is called “gendered language.” This means that the rules eliminate the use of terms such as father, son, mother, daughter, grandmother, and grandfather.

Pelosi, whose Twitter bio reads in part “mother, grandmother, dark chocolate connoisseur,” is directing the House to do as she says, not as she does. These changes are celebrated by far-left groups that are aiming to eliminate all distinction between the sexes, despite the scientific reality that these distinctions exist and matter.

The left also has dreams for major budget-busting, federal-takeover legislation, such as Medicare for All and the Green New Deal. In order to make that easier, the new rules package exempts certain legislation from what is known as PAYGO, short for “pay as you go.”

PAYGO, which long has been skirted in Congress, generally requires that new legislation that affects revenues and spending doesn’t increase budget deficits.

This rules package anticipates that several pieces of legislation with the highest costs in our nation’s history would be unsuccessful under PAYGO rules. So, the majority scraps the rule altogether for legislation dealing with climate change or the COVID-19 pandemic.

When it comes to social media, Pelosi is taking a page out of Big Tech’s book: censor and punish. House members who share “manipulated media,” defined as “any image, video, or audio file that has been distorted or manipulated with intent to mislead the public,” will be subject to reprisal.

The problem with this rule is not that members should be publishing “deep fake”-style videos, but with the vague language that can be used to unjustly punish political enemies.

For instance, would a Photoshopped image count? A clipped video? A parody? One needs to look no further than Big Tech’s selective censorship to find examples of how such a rule can be abused.

The proposed new rules also go broke for woke by permanently establishing an Office of Diversity and Inclusion. The goal of the office would be to direct and guide House employment offices to “recruit, hire, train, develop, advance, promote, and retain a diverse workforce.”

Simply stated, this is the first step toward affirmative action and quotas in hiring House staff.

Finally, the proposed rules contain provisions for beefing up congressional oversight authorities, which in fact are constrained by the Constitution, as opposed to House rules. Specifically, the rules state that any current and former White House officials can be subpoenaed.

This is nod to the intent of the House to continue its circus-like, vitriolic hearings aimed not at producing legislation but at generating ready-made-for-Twitter viral moments.

All in all, the proposed rules are less of a surprise than a confirmation of what has been expected for the 117th Congress. Expect more wokeness, rejection of minority input, financial recklessness, and show trials to be the major themes for the next two years.