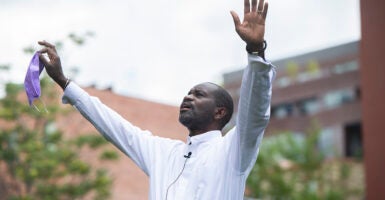 COVID-19 made 2020 an incredibly hard year for Americans. Governors and mayors made it worse by shrinking religious freedom.

It didn’t have to be this way. Most Americans have shown that they’re willing to take sensible precautions. But some of those in leadership positions have overreacted, to put it mildly.

As Supreme Court Justice Samuel Alito observed in November, “the pandemic has resulted in previously unimaginable restrictions on individual liberty. We have never before seen restrictions as, severe, extensive and prolonged as in 2020.”

But many localities also trampled on religious freedom by treating religious gatherings more harshly than secular counterparts. Malls, liquor stores, and abortion clinics were labeled as essential, while religious services in similar-sized spaces that could follow similar social distancing protocols were not.

During the summer, while mass protests over controversial police deaths filled the streets without repercussions, worship services at the beach were scrutinized.

Then, on the eve of Thanksgiving, the Supreme Court stepped in to address the mess. Faced with restrictions that permitted only 10 or 25 people into cathedrals and synagogues that once filled thousands, the Archdiocese of Brooklyn and Agudath Israel sued New York Gov. Andrew Cuomo, ultimately ending up at the Supreme Court.

The result was a resounding win for fairness and Americans’ first freedom. Noting a health official who testified that a large store in Brooklyn could “literally have hundreds of people shopping there on any given day,” the Court ruled that New York’s restrictions could not be viewed as “neutral because they single out houses of worship for especially harsh treatment.”

The court also observed that “The loss of First Amendment freedoms, for even minimal periods of time, unquestionably constitutes irreparable injury.”

The Supreme Court’s decision has been heeded by lower courts that have begun to restore freedom around the country. The government’s strong interest in public health isn’t compromised by treating religious gatherings in a fair and constitutional manner.

The pandemic has placed massive stress on our minds and emotions as well as our bodies. Many Americans rely on their faith and faith communities for strength to face each day. As death and economic hardship have increased, the spiritual strength offered by religious communities has become even more essential to the well-being of our nation.

As the Supreme Court recognized, taking communion and worshipping in community cannot be replaced by a Zoom service.

America faces an onslaught of “deaths of despair.” The Centers of Disease Control and Prevention reported 1 in 4 millennials contemplated suicide during the pandemic. Before the pandemic, the U.S. surgeon general had already warned that “social isolation is a major public health crisis, on par with heart disease or cancer.”

For Americans suffering from loneliness and isolation, belief in the transcendent bolstered by relationships can serve as a final barrier from going over the brink.

As America prepares for 2021, state and local officials should recognize the health needs of their citizens in the most comprehensive sense. They should respect the Constitution by treating religion as essential and by not engaging in religious discrimination. Our lives depend on it.