9 Wasteful Programs From Massive Spending Bill That Can, and Should, Be Reversed 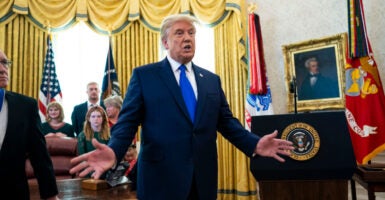 Under the Impoundment Control Act, the president can propose that Congress rescind, or cancel, specific unspent budget authority from programs he has determined are unneeded. Pictured: President Donald Trump presents the Presidential Medal of Freedom to Dan Gable in the Oval Office on Dec. 7, 2020. (Photo: Doug Mill/ Pool/Getty Images)

President Donald Trump is right: There’s a lot of ridiculous gimmicks and wasteful projects in the new massive spending bill.

And the good news is there’s something that Trump can do about it, even though he recently signed the huge COVID-19 stimulus and omnibus spending bill into law.

While signing the bill, the president released a statement announcing that he would use his authority to request that Congress rescind wasteful spending from the bill.

Under the Impoundment Control Act, the president can propose that Congress rescind, or cancel, specific unspent budget authority from programs he has determined are unneeded.

The rescission package would be considered by the House and Senate under expedited procedures, without being subject to a filibuster in the Senate, and with protections for a minority of members to prevent the bill from getting bottled up in committee proceedings.

This makes sense. The 5,593-page behemoth spending package was loaded with overspending, gimmicks, and dozens of unrelated other legislative provisions. It was written behind closed doors and voted on within hours of it being made public, preventing any member of Congress or the American people from understanding what was actually in it.

Here are nine wasteful programs funded by the omnibus, which has $1.4 trillion in spending, that should be rescinded:

The omnibus provides $150 million for grants to the Washington Metropolitan Area Transit Authority, the D.C. Metro.

This is yet another example of the capital city getting special benefits at the expense of the taxpayers from around the country. No other local transit system gets its own line-item appropriation. The Heritage Foundation has previously recommended this funding be eliminated.

The omnibus provides $40 million for federal payment for resident tuition support, which funds the D.C. Tuition Assistance Grant program to subsidize the out-of-state tuition for D.C. residents attending college in other states.

Simply put, it is wrong for taxpayers across the county to provide a special subsidy for residents of Washington, D.C., who are also eligible for all the other federal college benefit programs. This program has not even been authorized by Congress since 2012. The president’s budget recommended the program be eliminated.

The omnibus provides a total of $40.4 million for operations and maintenance and capital repair and restoration for the John F. Kennedy Center for the Performing Arts.

Using taxpayer funds to subsidize D.C.’s swanky opera house is one of the least defensible items in the entire federal budget. The Kennedy Center already received an additional $25 million as a part of the CARES Act. The Heritage Foundation has previously recommended eliminating this funding.

4. National Endowments for the Arts and Humanities: $335 Million

These two programs use federal tax dollars to make grants supporting arts and humanities projects, something that is much better done by private contributions. The two programs also received an additional $75 million from the CARES Act. Both the president’s budget and The Heritage Foundation have recommended these programs be eliminated.

The omnibus provides $14 million for the Wilson Center, a federally subsidized think tank. Federal subsidies make up about half of the center’s budget, and the dedicated appropriation is not needed nor is it appropriate. The president’s budget and The Heritage Foundation have recommended federal funding for this center be ended.

The omnibus provides $93.9 million for the Migrant and Seasonal Farmworker Training program, a $2 million increase from the fiscal year 2020 level.

This program is supposed to provide job training for migrant and seasonal farmworkers. Even if this was appropriate for American taxpayers to subsidize, it is duplicative of other job training programs. The president’s budget and The Heritage Foundation have recommended this program be eliminated.

This program provides grants meant to subsidize part-time community service activities by the elderly. The program is duplicative of other existing programs, is not cost effective, and nearly half of participants do not complete the program. The president’s budget and The Heritage Foundation have recommended eliminating the program.

The omnibus provides $230 million for the McGovern-Dole Food for Education and Child Nutrition Program, which uses taxpayer dollars to send American food to schools in foreign countries. The president’s budget has recommended this program be ended.

The omnibus provides $495 million for the Corporation for Public Broadcasting, most of which is an advance appropriation for fiscal year 2023.

Funding for the Corporation for Public Broadcasting has already been provided for the upcoming fiscal year in prior appropriations bills. The organization also received an additional $75 million as a part of the CARES Act.

The federal government should not use taxpayer funds to subsidize television and radio service, a task which is not needed nor appropriate. The president’s budget and The Heritage Foundation have recommended eliminating this funding.

These are just a small handful of examples of wasteful spending in the $1.4 trillion spending package. Even if all of the wasteful or unnecessary spending from the omnibus is rescinded, much more needs to be done in order to have a responsible budget.

Trump proposing a robust rescission package and Congress passing it would be an important first step toward making controlling spending a priority.